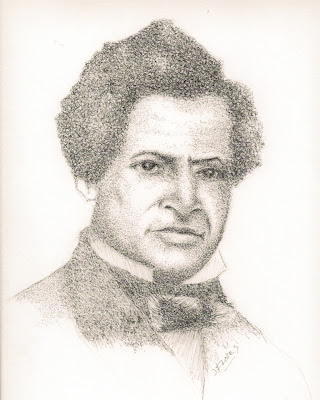 Jermain Wesley Loguen, famous “Underground Railroad King” of Syracuse, will be inducted into the National Abolition Hall of Fame and Museum at Saturday, October 22, 2011 ceremonies to be held at Colgate University in Hamilton NY. Milton C. Sernett Ph.D. professor emeritus of African American Studies and History, Syracuse University, provides a brief history of the new inductee:

Born into slavery in 1813 “Jarm” stole his master’s horse in 1834 and escaped to Canada West where he farmed for a few years. In 1837 he went to Rochester, NY and worked as a hotel porter. Later he attended Beriah Green’s abolitionist school at Whitesboro, NY and while there he started a Sunday school for African American children in Utica. He married Caroline Storum in 1840 and they had six children, one of whom (Amelia) married Lewis Douglass, the son of Frederick and Anna Douglass.

The Loguens moved to Syracuse in 1841. Jermain taught school and became a licensed preacher of the African Methodist Episcopal Church, serving congregations in Syracuse, Bath, Ithaca, and Troy. He was as much an abolitionist activist as a minister and became one of the nation’s most active agents of the Underground Railroad. He assisted the Rev. Samuel J. May, a Unitarian clergyman in Syracuse, with Underground Railroad work. The Loguen house near the intersection of Pine and Genesee Streets was a principal station on the Underground Railroad. Loguen placed letters in the Syracuse press openly discussing his activities and asking for donations to assist fugitives. Loguen is said to have aided more than 1500 freedom seekers.

Donna Dorrance Burdick, historian for the Town of Smithfield, relates, “In 1844 Frederick Douglass introduced Loguen to Gerrit Smith. On September 1, 1846, Loguen joined Henry Highland Garnet and Samuel Ringgold Ward as a recipient of common Peterboro property.” The passage of the Fugitive Slave Law in 1850 brought Loguen’s response of, &#8220It outlaws me, and I outlaw it.&#8221 Following his participation in the Jerry Rescue of October 1851, he was one of five African Americans indicted in the incident. He fled to Canada returning to Syracuse in the spring of 1852 and resumed his Underground Railroad activities.”

The Induction of Jermain Wesley Loguen begins at 1:30 p.m. in Golden Auditorium at Colgate University with I Owe My Freedom to the God Who Made Me: Jermain Loguen and the Struggle for Freedom presented by Carol Hunter PhD, professor of history at Earlham College in Richmond IN. Dr. Hunter’s 1989 doctoral dissertation at Binghamton University researched Loguen and the abolition movement in upstate New York. A revised and edited version of the work was published in 1993 as To Set the Captives Free: Reverend Jermain Wesley Loguen and the Struggle for Freedom in Central New York 1835-1872. Hunter’s lecture is one of the afternoon Upstate Institute Abolition Symposia programs supported by a grant from the New York Council for the Humanities.

Loguen’s official public nomination by Onondaga Historical Association, and others with Loguen connections, will be part of the October 22 evening ceremonies at 7 p.m. in Golden Auditorium at Colgate University. Loguen’s part in the Jerry Rescue of 1851 will also be included in John Rudy’s program The Jerry Level: Gerrit Smith and the Memory of the Jerry Rescue at 2 pm Satruday, October 1, 2011 at the Gerrit Smith Estate National Historic Landmark, 4543 Peterboro Road, Peterboro NY 13134-0169. (Admission: $2)

The public is encouraged to attend the Loguen sessions. Admission at the door for each of the lectures and the induction ceremony is five dollars. (Admission for all four symposia programs is eight dollars.) Information and registration forms for the day-long induction event are available at 315-366-8101 and [email protected] and www.AbolitionHoF.org.

Illustration: Portrait of Jermain Wesley Loguen created by artist Joseph Flores of Rochester NY for the National Abolition Hall of Fame and Museum for the occasion of the induction of Loguen to the Hall.