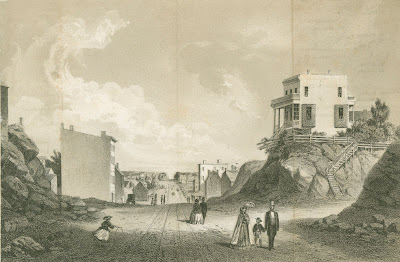 The first comprehensive exhibition to trace one of the most defining achievements in New York City’s history—the vision, planning, and implementation of Manhattan’s iconic grid system—will be on view at the Museum of the City of New York from December 5, 2011, through April 15, 2012.

The Greatest Grid: The Master Plan for Manhattan, 1811—2011 will document the development of the “Commissioners’ Plan,” which in 1811 specified numbered streets and avenues outlining equal rectangular blocks ranging from (today’s) Houston Street to 155th Street and from First Avenue to Twelfth Avenue.

The exhibition, which is organized on the occasion of the bicentennial of the plan, will elucidate, through maps, photographs, and other historic documents, this monumental infrastructure project—the city’s first such civic endeavor—which transformed New York throughout the 19th century and laid the foundation for its distinctive character.

Some 225 artifacts will be on view in the exhibition, which is organized chronologically and geographically, leading visitors from 17th-century, pre-grid New York through the planning process and the explicit 1811 Commissioners’ Plan, and from the massive and elaborate implementation of the plan to contemporary reflections on New York and visions for its future.

“The 1811 grid was a bold expression of optimism and ambition,&#8221 Susan Henshaw Jones, the Ronay Menschel Director of the Museum said. &#8220City commissioners anticipated New York’s propulsive growth and projected that the city—still relatively small at the time and concentrated in what is now Lower Manhattan and Greenwich Village—would extend to the heights of Harlem. The 1811 plan has demonstrated remarkable longevity as well as the flexibility to adapt to two centuries of unforeseeable change, including modifications such as Broadway and Central Park. The real miracle of the plan was that it was enforced.&#8221

The exhibition will showcase the illustrious—most notably, John Randel, Jr., who measured the grid with obsessive care. Randel was an apprentice to Simeon DeWitt, the surveyor general of New York State from 1784 to 1834. Between 1808 and 1810 Randel measured the lines of streets and avenues at right angles to each other, and recorded distances and details about the island, its features, and its inhabitants. This resulted in a manuscript map of the grid plan, which he completed by March 1811. Randel continued surveying the island from 1811 to 1817, setting marble monuments (one of which will be on view in the exhibition- there were to have been 1,800) to mark the intersections of the coming grid. Between 1818 and 1820 Randel drafted a series of 91 large-scale maps of the island, now known as the Randel Farm Maps (ten of which will be on view). An article written in the 1850s cited Randel as “one of our most accurate engineers,” further stating that his survey of New York City was done “with such a mathematical exactness as to defy an error of half an inch in ten miles.”

The commissioners’ detailed notes about the grid will also be on view in the exhibition, explaining the plan and expressing their intent to “lay out streets, roads, and public squares, of such width, extent, and direction, as to them shall seem most conducive to public good&#8230-” (From “An Act relative to Improvements, touching the laying out of Streets and roads in the City of New-York, and for other purposes. Passed April 3, 1807.” )

Other colorful figures will be highlighted, including William M. “Boss” Tweed, who implemented high-quality improvements, advanced services, and pushed forward many amenities while at the same time benefitting his associates.

Other rare and exquisitely detailed maps dating from 1776 to the present will be on view, alongside stunning archival photographs portraying the island of Manhattan throughout various stages of excavation. An extraordinary street-by-street explanation of the plan in the words of the commissioners—Gouverneur Morris, Simeon De Witt, and John Rutherfurd—will be on view as will other historic documents, plans, prints, and more.

The merits of the grid will be debated. Historians have viewed it as the emblem of democracy, with blocks that are equal and no inherently privileged sites. Historians have also praised its utility, its neat subdivisions that support real estate development. The rectangular lots of Manhattan’s grid parallel Thomas Jefferson’s national survey, which organized land sales in square-mile townships. The grid manifests Cartesian ideals of order, with streets and avenues that are numbered rather than named for trees, people, or places. Frederick Law Olmsted bemoaned its dumb utility and lack of monuments and other features. Jane Jacobs credited city streets with creating New York’s public realm. And Rem Koolhaas called the grid “the most courageous act of prediction in Western civilization: the land it divides, unoccupied- the population it describes, conjectural- the buildings it locates, phantoms- the activities it frames, nonexistent.”

The Greatest Grid will reframe ideas about New York, revealing the plan to be much more than a layout of streets and avenues. The grid provided a framework that balanced public order with private initiative. It predetermined the placement of the city’s infrastructure, including transportation services, the delivery of electricity and water, and most other interactions. Manhattan’s grid has provided a remarkably flexible framework for growth and change.

Visitors will have the opportunity to consider New York’s preparation for the future and whether or not the grid will enable the city to face 21st-century challenges. New proposals for the city, the results of a competition, will be on view in a separate, related exhibition co-sponsored by the Architectural League. The Greatest Grid will also feature “12 x 155,” a conceptual art video by artist Neil Goldberg along with other artistic responses, such as original drawings from the graphic novel City of Glass (Picador, 2004) by Paul Auster, illustrated by Paul Karasik and David Mazzucchelli

The Greatest Grid is co-sponsored by the Manhattan Borough President’s Office.

The exhibition is accompanied by a companion book of the same title, co-published by the Museum of the City of New York and Columbia University Press. Dr. Hilary Ballon, University Professor of Urban Studies & Architecture at the Robert F. Wagner Graduate School of Public Service at New York University, conceived of the exhibition, is its curator, and is the editor of the companion book.

A related exhibition, on view concurrently at the Museum, will feature the results of a competition in which architects and planners were asked for submissions using the Manhattan street grid as a catalyst for thinking about the present and future of New York- this exhibition is co-sponsored by the Architectural League of New York.