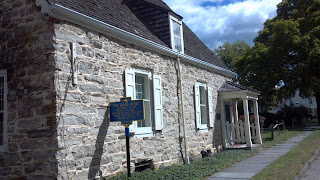 The town of Hurley &#8212- or what’s left of it after the Ashokan Reservoir sent much of the sprawling township to a watery grave &#8212- celebrated its 350th anniversary on September 15th. Jazz, roasted corn, artichokes marinated in white wine with chunk style garlic, and merry shouts of the kids popping balloons and reenactors popping muskets filled the air with smells and sounds of festivity.

Founded as Nieuw Dorp, New Village in Dutch, in the era of Pegleg Peter Stuyvesant, the Dutch village soon found itself at war with the local Esopus Indians, who didn’t appreciate the newcomers. With wooden houses burnt to the ground, the next waves of building in limestone proved more fire-resistant.

Renamed Hurley, once the English got control of New Netherlands colony in 1664, the town’s main street still features a stunning array of stone houses. Dutch building styles using the abundant limestone from local quarries, feature the thick walls that make these houses so well-insulated, holding in cool in summer and heat in winter.

The oldest built around 1690 served as a guard house in the American Revolution. A British spy named David Taylor was held there until convicted and hanged from a nearby apple tree. It was thanks to the Works Progress Administration that we have documentation of many of these places, such as the DuMond House used by the Revolutionary Army. That house was surveyed for the federal Historic Americans Buildings Surveys which used historical brainpower idled by the Great Depression to inventory historical sites and stimulate public interest in visiting and preserving heritage. 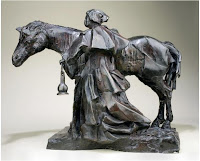 Since road-building was another huge work project for the jobless, this also gave people an incentive to travel on the new roads, and maybe boost local economies with some tourist spending.  Those little blue and gold signs marking historical spots you find around the state are a legacy of New York’s 1930s state historic marker program &#8212- an early public history effort which solicited recommendations from local historians to draw attention to interesting sites.

However, they missed Sojourner Truth on that round. My updating for the program would include the suggestion that they nominate some spot in Hurley where Truth had her spiritual revelation in the woods that led her to become a charismatic preacher. This dramatic conversation experience laid the foundations for her better-known work as a fiery speaker on the abolitionist circuit.

If Hurley really wants to remember Sojourner, they could ask sculptor Barbara Chase-Riboux to execute a full scale version of her bronze figure for the town square.  Sojourner’s birth and slavery in the town are a reminder that upstate Dutch and English farmers relied on slave labor for growing the wheat, rye and barley which were the important 18th and 19th century crops, until cheap Western wheat exported over the Erie Canal system wrecked that economy. 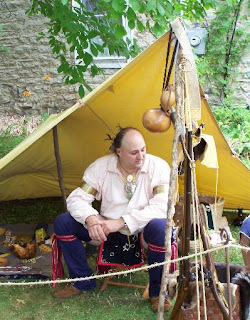 Business picked up after the Civil War with the exploitation of bluestone, a shale mined from quarries in the township and hauled down to a landing on Roundout Creek to be made into curbstones and other Manhattan architecture. You can see bluestone that paved the wagon road with its deep ruts from the groaning wagons along the main street and in the yard of the Hurley Heritage Society Museum. Don’t miss the gigantic sausage stuffer inside the stone house museum: no part of the big pig went wasted in the cultures of Northern Europe that settled the Hudson Valley.

The town festivities featured the 3rd Ulster County Militia who made an encampment near the banks of the Esopus Creek.  There was much to admire in their linsey-woolsey shirts, rough breeches and hand-forged camp gear. The colonial dames were careful to avoid soot from the portable braziers, as their long skirts and aprons trailed. The volunteers explained that militias needed to drill on the village green, not only as a convenient assembly point, but also to be near the tavern to refresh the troops after such drying work. Authentic ruddy complexions attested to the good effects of drinking beer and punch, rather than contaminated 18th century water.

This encampment featured a handsome display of trade silver, thin hammered pieces which were made in great quantity with incised decorations for exchange with Native Americans. One of the militia members makes trade silver reproductions which some members were wearing. Only the man playing a Native warrior dared to go for serious bling, but then he could afford it, since he was the silversmith.