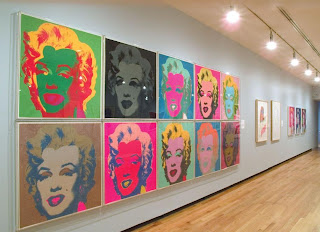 An extensive selection of works by the one of 20th century’s most compelling artist will be spotlighted in the exhibition “The Prints of Andy Warhol: From A to B and Back Again” on view June 9 through September 8, 2013 in the Museum of Art, Munson-Williams-Proctor Arts Institute.

Because Warhol lived through interesting times and was an astute observer of social mores, his artwork at once captures and reflects the gloss of packaging and marketing that has mushroomed in post-World War II America. That rampant consumerism continues to define the United States in the new century demonstrates the perspicacity of Warhol’s vision.

Mary Murray, MWPAI Curator of Modern and Contemporary Art, said Warhol was a canny, astute observer of contemporary America who at the same time sought fame and glamour. “He was at once the ultimate insider who observed everything as an outsider, hiding behind his ubiquitous camera,” she added.

“The Prints of Andy Warhol” presents Warhol as a canny observer of American popular culture. A working-class Catholic boy from Pittsburgh who became a successful graphic artist and then the toast of the New York City art world, Warhol understood like very few in his era the power of aspiration and desire in product packaging and marketing. From soup to politicians and movie stars, all imagery was fodder for his shrewd assessment- he elevated a collection of mundane soup cans into a minimalist-inspired grid and leveled the glamorous movie star head shot into a garish clown mask. The exhibition asks if this body of work is, as Warhol maintained, a portrait of America or an unblinking unmasking of American values.

“The Prints of Andy Warhol” will begin with an orientation gallery that features an introduction video and reading table- the galleries will include printed labels, guide-by-cell commentary, and a mobile tour for smartphones.

MWPAI is developing programs for children that include gallery conversations with art-making projects, as well as public programs for adults that will discuss Warhol within the context of Pop art and mass media. In these ways, MWP expects to demonstrate that behind the initial delight of Warhol’s colorful, familiar imagery there are weighty matters to consider.

“The Prints of Andy Warhol: From A to B and Back Again” is organized and circulated by The Andy Warhol Museum, Pittsburgh.