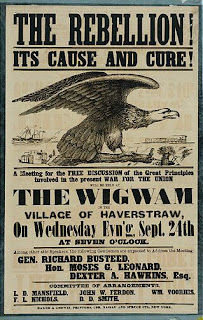 Time and time again presentations on life back then in antebellum (before the war) times begin with Gone with the Wind, still the box-office champion adjusted for inflation. What story does the North including New York have to tell that can compare with the pageantry of the South, the chivalry of the idealized plantation, and the glamour of Rhett Butler and Scarlett O’Hara, Clark Gable and Vivien Leigh? Freedom and preserving the Union that made the world safe for democracy in the three world wars in the 20th century should count for something, even for Confederates.

At the Teaching Hudson Valley conference last week the Civil War in the Hudson Valley, New York, and the North was one of the subsets of programs offered. These offerings combined a traditional lecture presentation by a Marist professor, a visit to the Columbia County Historical Society, and a joint presentation by the New York State Historian and a second Marist professor about the new New York State Museum exhibit and website to go live in September and on some of the experiences of the Hudson Valley regiments in the war.

The Lost Cause versus the Reality of War: The Hudson Valley Experience
Mark James Morreale, Chair, Department of English, Marist College

This presentation concerned ways to disabuse college students of a Lost Cause interpretation of the Civil War.  When Morreale teaches courses in Civil War literature, he always finds a distinct disconnect between the students’ understanding of the Mid-Victorian era and the realities of the time period.  Students, in other words, have almost always bought into the logic of the Lost Cause—no matter where they’re from—and have almost always sentimentalized and romanticized the period until their vision of the time period almost becomes unrecognizable, given the time period’s realities.  Even if they have never seen or heard of (let alone read) Gone with the Wind, for example—and most of them have not done any of those things—its Lost Cause vision of the literature and history of the time period tends to dominate.

As a teacher, Morreale, who provided this abstract, learned that one of the best ways to disabuse students of these sentimentalized, unrealistic and romanticized views of both the antebellum and post-bellum time periods is to expose students to the actual views of the period, through the reading of soldiers’ and civilians letters and diaries, meaning primary source documents just as teachers are suppose to use in k-12 schools. However, given the time constraints he is under in any given semester, just like k-12 teachers, Morreale creates a composite narrative of a typical Civil War soldier’s experiences, accompanied by a PowerPoint presentation to illustrate the narrative as it proceeds.  He includes such topics as Why they Fought, Coming to Grips with the Issue of Race, Camp Life, Discipline, On the March, Civil War Combat, &#8220Harvest of Death,&#8221 Caring for the Wounded, A &#8220Decent&#8221 Interment, and &#8220These Honored Dead.&#8221  In a single session at the THV conference he could only introduce these topics with some primary source examples just as scholars of the future will use emails, tweets, and other forms of social media to portray the wars in Afghanistan and Iraq.

One of the striking visuals of the exhibit at the Columbia Historical Society is a series of wall-sized lists of the soldiers from the county who served in the war organized by municipality. Since the population of the county has not changed that much since the Civil War, one immediately sees that for years on the end the equivalent of every male in the high school senior class and then some participated in the war.

These lists really bring home the enormity of the war effort, a point Jason Schaaf, Education Supervisor, Hudson River Valley Institute, Marist College, made the following day when he joined New York State Historian Bob Weible in his session on the new exhibit. The list of names made visible his suggestion that we multiple all Civil War numbers by a factor of ten to equate them to our population numbers.

Another way of sharing the Civil War experience in Columbia County is doing what Mark Morreale had done &#8211 read the letters. Kjirsten Gustavson, Clermont State Historic Site, in costume read the letters from soldiers to Carrie Niles of Spencertown. Some of them were remarkable for their erudition in discussing the political situation as well as emotionally and psychologically revealing of the mixed feelings of these young men going off to war far away from home and family. These letters provide a personal and intimate portrait of the real people engaged in that most horrific of wars.

Mark Stewart, a teacher in the Florida UFSD who has participated in IHARE programs, intends to bring this personal element to his classroom. He seeks to get students involved in research, with internet sources, NYS Archives, and local historical societies through the 50 Civil War veteran graves in his village. The Columbia Historical Society was able to link some photos and papers and it also would be nice to know where these people lived&#8230-and what is on that land today. Several years ago, Stewart used those names to work with an ELA teacher with students to write historical fiction.

Now he is going to have students research the veterans’ units including where they fought, any news articles about them, photos, etc. He will start by visiting the relatively small cemetery to photograph the stones and perhaps take rubbings. Stewart recently visited the Mt. Repose Cemetery in Haverstraw in Rockland County where he grew up and heard about the recent groundhog who decorated his lair with flags from the Civil War cemetery in Hudson, the only Civil War cemetery in the county. The Columbia County Historical Society assured us through its mascot groundhog that the Hudson groundhogs were not guilty of this crime. His rebuttal was even published.

What Should New York Do?

Given these experiences and other activities and non-activities, what should New York do to remember and honor its citizens who contributed to the Union cause? I would like to take this opportunity to suggest several actions some of which may be underway already and for which I deserve no credit. The key topics for New York to be addressed are:

Life on the Homefront
The Underground Railroad
The Battles in which the New Yorkers fought
The Elections of 1860 and 1864
The Legacy of the War.

Statewide venues where these topics can be addressed include among others:

2. New York State Council for the Social Studies annual conference, Rye Brook, probably in March, to include a track of sessions relate
d to the Civil War including guest speakers, historical society/museum presentations, teacher presentations, and workshops on teaching New York’s role in the Civil War. Regional social studies council conferences can do the same for their own region.

3. MANY/Museumwise and APHNYS annual conferences in the same week in April 2013 in Syracuse provide another opportunity for municipal historians and historic organizations to address these topics perhaps in cooperation with the Central New York Council for the Social Studies also based in Syracuse.

4. NYSHA annual conference in Cooperstown in June can have a New York Civil War track just as it had a War of 1812 track at the 2012 conference in Niagara Falls.

5. The New York State Archives and the Albany Law School might hold a second Civil War conference, this time one more accessible to teachers.

With the Common Core Curriculum who knows what will be proposed about teaching the Civil War and what will directly relate to New York State. Since the State provided more troops to the Union cause than any other one might think that the Civil War, whose scale dwarfs that of 9/11, Iraq, and Afghanistan combined, would be featured prominently and with ample opportunity to tailor it to the local story. But considering the low level of commitment at the State level to remembering the Civil War during the Sesquicentennial, there is no reason to be optimistic about what will be included in the curriculum either.

Here is one thing our governor could do. Since New Yorkers fought so many battles on Southern sites that are now historic parks, why not contact your fellow governors in the South and invite them to send representatives to meet with the descendants of the northern soldiers in the New York communities from whence they came? Invite the Confederates of the Lost Cause to visit the homefront of the New Yorkers who fought them. The war is over now, isn’t it? We are one country now, aren’t we? We cheer for the same Olympic team, don’t we? Let’s remember the war together.

One thought on “Peter Feinman: New York and the Civil War”