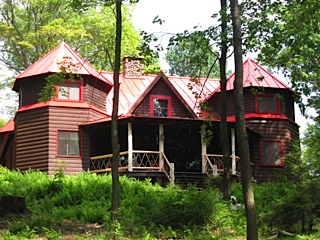 Whether a historic site or a spectacular new design, individuals with noteworthy homes will host tours during the Annual Fulton Chain of Lakes House Tour by Boat to benefit View, the former Old Forge Arts Center.

Beginning in Old Forge, participants will ride party barges from house to house as they explore local waterways and get the rare chance to view inside the beautiful homes along them. The House Tour will be held on Saturday August 18. Departure will be from the Old Forge Town Docks, at Lake View Ave, in Old Forge, NY promptly at 10am and will return in the middle of the afternoon. To ensure a smooth departure, guests should arrive early, beginning at 9am.
This year’s House Tour By Boat will feature six great camps and homes including Berkeley Lodge, which was once President Benjamin Harrison’s Adirondack Residence. What appears to be just a boathouse from the lake is actually just the beginning of Berkeley Lodge. Former President Benjamin Harrison (of Indianapolis) purchased the 20 acre peninsula between First and Second Lakes in 1895 from Dr. William Sweard Webb.

Berkeley Lodge was designed by a Herkimer architect, Charles E. Cronk, and built in time for Harrison’s return in the summer of 1896 after his 2nd marriage to Mrs. Mary Lord Dimmick. The Lodge living room is flanked by twin octagonal towers at either end. The exterior of Berkeley was sheathed with spruce logs at the bottom and shingles below the eaves. Attached to Berkeley was a cottage containing a kitchen, dining room, and office. The camp also had a house for guides and a boathouse. 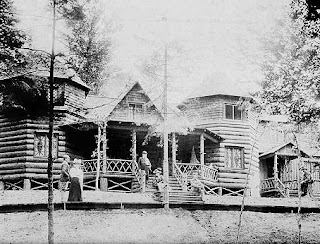 In 1910 the property was sold to a New Yorker and then later in 1915, it was purchased by Horace S. deCamp. Horace owned the Harrison property until his death in 1954 and the property was sold at auction and purchased by the Cohen family. The Cohen family sub-divided the property into several parcels before selling Berkeley Lodge. The Lodge, and several other buildings survive to this day. The great camp is owned by Bob and Diane Wallingford, who have renovated a portion of the lodge that was added on in the 1950&#8242-s by the Cohens, made the icehouse/carriage house into a bunkhouse, added a garage and renovated the boathouse keeping all of the same flooring and beams.

Tickets must be purchased in advance. Tickets are $65/$50 for View members. This is a rain or shine event which typically sells out, so call View to reserve your ticket at 315-369-6411. For further questions email [email protected], or visit www.ViewArts.org.

Photos: Above, Berkely Lodge today, and below, at the time Harrison owned it.