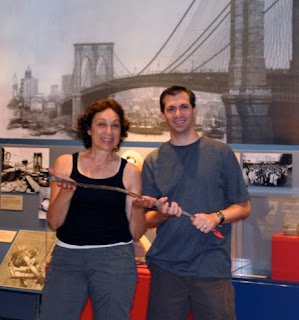 A new drama Roebling: The Story of the Brooklyn Bridge is in development for a New York City Equity Showcase Production to be produced by special arrangement between the author Mark  Violi and Theater to Go. Plans are underway to present this show in March 2013.

Based on the true story of the Roebling family who helped conceive, design and finally build the New York’s Brooklyn Bridge, the play has been endorsed by the Roebling Museum and by descendants of John Roebling. &#8220Roebling: The Story of the Brooklyn Bridge&#8221 brings to the stage the human drama surrounding the construction effort to complete one of the most enduring engineering icons in the world. The play examines the beginnings of the project to build the Brooklyn Bridge in1869, through its completion in 1883. It is a play about a forward thinking family on the cutting edge of the Industrial Revolution. The play shows how this project foreshadowed the 20th century in its huge ambition, the revolutionary construction techniques developed by John Roebling and implemented by his son Washington, and in the recognition of the invaluable role that a woman, Emily Roebling, played in the completion of this enormous project. &#8220Roebling: The Story of the Brooklyn Bridge&#8221 has had two widely acclaimed non-equity productions in Pennsylvania and in New Jersey. The New Jersey premier was produced in 2010 by invitation of the Roebling Museum to open the restored Roebling Auditorium and it was because of the overwhelming response to this play that plans were implemented to bring it to NYC. Fundraising has begun through IndieGoGo. Through a special arrangement with Fractured Atlas, Theater to Go is able to accept tax deductible contributions and has arranged to offer some incentives donated by the Roebling Museum including artifacts from the Roebling factories. With the success of the fundraising, this showcase production is seen as a first step toward a larger New York production. Theater to Go is well known throughout the Mid-Atlantic region for their  unique interactive theater events. At the helm is Ruth Markoe who has produced, directed and performed throughout the region for many years and who brought the NJ premier to the stage. Photo: Mark Violi and Ruth Markoe holding original cable from the Brooklyn Bridge (provided).