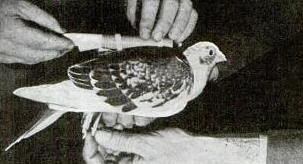 Homing pigeons have long been used for racing and for their unique ability to navigate, an asset once capitalized upon by the military. As noted in last week’s entry here, “Their use during World Wars I and II is legendary, and many were decorated with medals. In 1918, pigeon racing was temporarily banned in the United States to ensure that all birds were available for the use of the military.”Domestically, homing pigeons were an accepted form of communications, and thus enjoyed legal protection. The public shared the responsibility of nurturing any pigeon found in distress, and if need be, contacting the owner via information from the bird’s leg band.
For more than a century, the pigeons were regularly encountered in the North Country. “Homers” were often used for races from 100 to 500 miles, and they didn’t always alight where the owner intended, usually due to stormy weather.Many of the birds that landed in the Adirondack region came from Montreal, where their use for racing and message carrying was common. In 1912, one such Canadian visitor settled inside the walls of Clinton Prison at Dannemora. The warden dutifully cared for the bird and attempted to contact its owner.In 1898, little Miss Gertrude Hough of Lowville received a letter by US Mail from the Los Angeles post office. It had arrived in LA attached to a pigeon that had been released by Gertrude’s father from Catalina Island, more than 20 miles offshore.And in 1936, a homing pigeon landed on the window sill of a Malone home, where it was treated to the proper care. Well beyond the norm, the bird’s journey had begun in Montana.Invariably, efficient systems like bank accounts, credit cards, the internet, and homing pigeons are usurped for other purposes. In recent years, pigeons have been used by ingenious crooks to smuggle drugs from Colombia and diamonds from African mines.In both cases, the North Country was light-years ahead of them. In 1881, an elaborate case of diamond smuggling from Canada into St. Lawrence County was uncovered. A Rensselaer Falls farmer brought to customs authorities a dead “carrier pigeon” with part of a turkey feather, filled with diamonds, attached to the bird’s leg.During the investigation, two more diamond-carrying birds were shot. It was discovered that baskets of birds were being mailed to locations in Canada, and other flocks were located south of the border, awaiting duty. Shipments of pigeons had originated at DeKalb Junction, Heuvelton, Rensselaer Falls, and Richville, and the value of diamonds successfully smuggled was estimated at $800,000 (equal to about $17 million today). 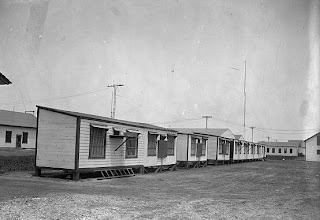 During Prohibition, both booze and drug smuggling were rampant. In 1930, US officials were tipped off that a number of homing pigeons were routinely being shipped north into Quebec. Upon release, they crossed back into northern New York.Authorities at Ogdensburg were put on the case when it was found that each pigeon bore a payload of about one ounce of cocaine. At times, it was literally a fly-by-night operation—some of the birds had been trained to fly under cover of darkness.Homing pigeons also played a role in regional historical events. In 1920, a military balloon launched from Rockaway Point in New York City sailed across the Adirondacks. Last sighted above Wells in Hamilton County, it then vanished. Extended high-profile searches turned up nothing, and three men aboard the balloon were lost.Such missions routinely carried homing pigeons for air-to-ground communication. It was believed that an injured pigeon found on a Parishville (St. Lawrence County) farm had been launched from the balloon, and that its message had been lost during the accident that had broken the bird’s leg. This led to the belief that the balloon had gone down over Lake Ontario.One of the most famous kidnapping cases in American history occurred in 1932 when the Lindbergh baby disappeared. When the body was found, nearly every newspaper in the land covered the story the next day with multiple articles.Among the first stories was one emanating from Lowville, New York, where a homing pigeon had landed at the home of Arthur Jones. The bird’s leg had a non-traditional attachment—a piece of twine holding a paper tag bearing the inscription, “William Allen, New Jersey.” It was William Allen of New Jersey who found the Lindbergh child’s corpse.Lead investigator Colonel H. Norman Schwarzkopf (Stormin’ Norman’s father) followed up on the information and then issued a statement: “Reports from Lowville show that no registry tag was found on the carrier pigeon. This practically precludes the possibility of further tracing the pigeon unless the owner of the same voluntarily reports its absence.”In June, 1936, before more than two dozen reporters and celebrities, former World Heavyweight Champion Jack Dempsey and his wife released a homing pigeon from the tower of the Empire State Building at 11:20 am. Less than five hours later, it arrived at Scaroon Manor on Schroon Lake, bearing the first honeymoon reservation of the season.It wasn’t for Dempsey’s honeymoon—it was just a publicity stunt to keep his name active in the media, and certainly raised the manor’s profile as well.Photos: Top?Homing pigeon with message in tube. Bottom?US Naval Station pigeon houses (1925).
Lawrence Gooley has authored eleven books and dozens of articles on the North Country’s past. He and his partner, Jill McKee, founded Bloated Toe Enterprises in 2004. Expanding their services in 2008, they have produced 22 titles to date, and are now offering web design. For information on book publishing, visit Bloated Toe Publishing.

One thought on “Part Two: The Homing Pigeon in NY History”