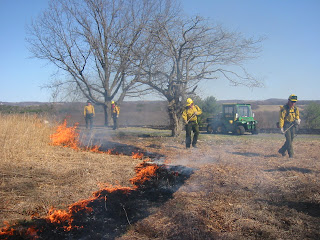 This “summer burn” will include the Chatfield Farm area of the Battlefield.  The burns may take up to three days to complete, and the park will remain open to visitors during this time.  The park has historically conducted prescribed burns in the Spring.

This shift from spring to summer burning is an experimental approach to see if the application of fire at a  different time will yield better results in the management of the types of plants found in the fields.  It is hoped the summer burn will result in  greater success in ridding the park of unwanted invasive and woody stemmed  plants.

For over twenty years, prescribed fires have been a valuable and safe tool in managing Saratoga Battlefield’s 3200 acres.  Planned burns allow the park to maintain its historic 1777 landscape, reduce the spread of exotic plant species, encourage regeneration of natural grasses and eliminate the
need for personnel to work on hazardous slopes with mechanical equipment.  Additionally, hazard fuel reduction around developed areas provides for firefighter safety and structure protection in the event of a natural wildfire.

Before such a prescribed fire can occur, an official Fire Management Plan  is required. Saratoga National Historical Park’s Fire Management Plan was approved by regional National Park Service Fire Management Officers. Neighboring fire departments are informed of daily plans and prior to
igniting a fire, and park staff runs down a go/no go checklist prior to any  firing.

If you have any questions about prescribed fires at Saratoga National Historical Park or park events, please contact the park’s visitor center at (518) 664-9821 ext. 1777.