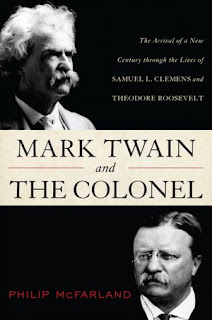 Around 1900 two celebrated figures with close ties to New York rivaled each other in the love of their countrymen: Mark Twain and Theodore Roosevelt. Theodore Roosevelt dominated the politics of the era the way the author of Huckleberry Finn dominated its culture.

As national celebrities, Roosevelt and Mark Twain were well acquainted, and neither spoke ill of the other in public. Yet Philip McFarland, author of five works of non-fiction, reveals a behind-closed-doors rivalry in his new book, Mark Twain and the Colonel: Samuel L. Clemens, Theodore Roosevelt, and the Arrival of a New Century (2012, Rowman &amp- Littlefield).
The book chronicles in-depth a relationship so prickly that it led Roosevelt privately to comment that he &#8220would like to skin Mark Twain alive&#8221 and the humorist to assert that Roosevelt was &#8220far and away the worst President we have ever had.&#8221

Focusing on the issues from which modern society has emerged and framed within those clamorous and influential decades in American history, McFarland tells a remarkable story of popular culture and personal biography in Mark Twain and The Colonel.