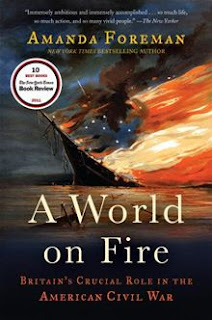 Amanda Foreman’s New York Times bestseller A World On Fire: Britain’s Crucial Role in the American Civil War  (Random House Paperback, 2012) uncovers the pivotal role Britain and its citizens played during the Civil War. The book was named one of the Best Books of the Year in 2011 by The New York Times and The Economist, and has won the Fletcher Pratt Civil War Prize, and was named as a finalist for the PEN Hessell-Tiltman Prize, the Lincoln Prize, the Jefferson Davis Prize, the Lionel Gelber Prize, and the National Book Critics Circle Award.

Between 1861 and 1865, approximately 50,000 Britons volunteered their services to join America’s Civil War. They joined up to be officers and infantrymen, seaman, surgeons, spies, blockade-runners, nurses, and wives following their husbands into battle. Although most fought for the North, those who volunteered for the South were no less enthusiastic, finding their bonds with the Southern gentlemen plantation owners and England’s vital reliance on cotton as more than enough reason to lend their support.
In the drawing rooms of London and the offices of Washington, on muddy fields and aboard packed ships, Foreman makes use of a wealth of previously unpublished letters and journals and reveals the decisions made, the beliefs held and contested, and the personal triumphs and sacrifices that ultimately led to the reunification of America.

Amanda Foreman is the author of the international bestseller Georgiana, Duchess of Devonshire (1999) which won the Whitbread Prize for Best Biography. The book inspired a documentary, a radio play starring Dame Judi Dench, and a film, The Duchess, released in 2008, starring Keira Knightly and Ralph Fiennes. Foreman was born in London, brought up in Los Angeles, and educated in both America and England. She received her doctorate in Eighteenth-Century British History from Oxford University in 1998. She is currently a research fellow at Queen Mary, University of London.