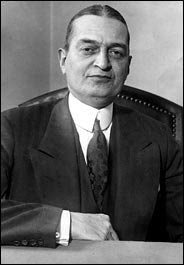 After NYS Supreme Court Justice Joseph Crater went missing in New York City in 1930, the search led to Plattsburgh and then to the Meridian Hotel, a few feet across the border from Champlain.

Nothing concrete was found in New York’s northeastern corner, but a few days later, Crater was sighted at Fourth Lake in the Old Forge area. He was also “positively” identified as one of two men seen at a Raquette Lake hunting lodge in late August. Two detectives followed that trail, while others were summoned to confirm a sighting at the Ausable Club near Keene Valley.

As if that weren’t enough, it was announced that Crater had spent a couple of days at Hulett’s Landing on the eastern shore of Lake George, and then at Brant Lake. Police and detectives pursued every lead, while headlines told the story from New York to Texas to Seattle.

A sure sighting was confirmed by three employees of Tupper Lake’s Altamont Hotel. Investigators there pursued the trail to Cranberry Lake. Elsewhere, police spent two days searching every room of every cabin on Saratoga Lake. Later, the Altamont sighting turned out to be a businessman from Buffalo, and the Horicon (Brant Lake) report was proven bogus.

By mid-September, the search had gone nationwide, but most of the top investigators still believed Crater was roaming through the Adirondacks.

Five months after Crater vanished, the plot thickened. Returning to their Fifth Avenue apartment for the first time, Stella found hidden envelopes containing insurance policies, cash, stocks, bonds, uncashed checks, a list of people who owed money to her husband—and a long note, ending with what appeared to be, “I am weary. Love, Joe.”

Police insisted those materials were not present when they searched the apartment months earlier. As the mystery deepened, suspicions and theories abounded. Why would a popular judge simply disappear? Speculation raged as the hunt continued.

It all proved futile—Crater was nowhere to be found, and none of the sightings were positively substantiated. Within a year, the modern equivalent of $4 million had been spent, and leads had been followed in New York City, Maine, Canada, Mexico, and Cuba.

At Crown Point on Lake Champlain, exactly a year after his disappearance, New York City investigators followed up on a report that an unidentified man, now said to be Crater, had died in a fall from the cliff at Big Hollow. Nothing conclusive was ever found.

Like the ubiquitous sightings of Elvis since his death, Crater was everywhere: hunting in the Adirondacks- lounging on the Boardwalk at Atlantic City- a patient in a Virginia sanatorium- prospecting in California- shaved by a barber in North Dakota- and found floating off the coast of New England. Eventually, he was seen in Europe, South America, and in all 50 states.

One caller from Montreal gave the hotel and room number where Crater could be found at that very moment. Authorities in Canada were notified. Rushing to the scene, they burst in to find a thoroughly embarrassed couple on their honeymoon. The prank caller must have been pleased.

Five years after Joseph’s disappearance, an inmate at Dannemora Prison claimed to have knowledge of Crater’s whereabouts, but would share the information only with Stella. She declined, based on the advice of the warden, who said it was nothing more than a scam to seek commutation of the prisoner’s sentence in return for his story.

For insurance purposes, Joseph Crater was declared legally dead in 1939, but the story had legs. The search went on and sightings continued for many decades. Those “I saw Judge Crater!” stories above are rooted among the 16,000 tips received through 1980, half a century after he vanished. He was long referred to as “the Most Missingest Man in New York.”

At the end of his act, Groucho Marx was said to have often commented, “I’m going to step out and look for Judge Crater.” Common for decades as a joke and in graffiti were lines like, “Judge Crater, call your office” and “Paging Judge Crater.” His name made it into the vernacular as well. For decades, the phrase “pulled a Crater” was an everyday expression referring to someone who suddenly disappeared or was being evasive.

His was a complex story with many possible endings: a new life, suicide, a mob hit, and death because of political problems, mistress troubles, or financial dealings. In August 2005, 75 years to the month after Crater disappeared, a new wrinkle surfaced with the death of 91-year-old Stella Ferrucci-Good in New York City.

Among her belongings in a safe-deposit box was a letter marked for opening only after her death. The letter said that over drinks long ago, her husband had heard the names of Crater’s killers. She named them (investigators have followed up with varying results), and said Crater was buried under the Boardwalk, beneath the current site of the New York Aquarium.

Perhaps he sleeps with the fishes after all.