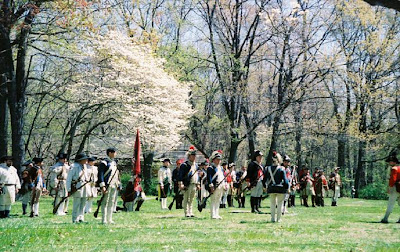 New Windsor Cantonment State Historic Site will host a weekend of Revolutionary War military firing demonstrations and period activities on Saturday April 28 and Sunday April 29, presented by the Brigade of the American Revolution, an international organization dedicated to recreating the life and times of the common soldier of the War for Independence, 1775-1783. Formed in 1962, the BAR celebrates its 50th anniversary this year.

A battle demonstration takes place at 2:00 PM each day with colorfully uniformed soldiers firing muskets and maneuvering to the music of fifes and drums. The soldiers will also set up tents, prepare cooking fires and demonstrate other aspects of 18th century life.

Visitors will also see women and children, the family members of the soldiers who traveled with the army. Members of the Brigade of the American Revolution use this weekend to teach the latest knowledge in recreating life from that era. The presentations are an enjoyable experience, something to be long remembered. Through lectures and demonstrations, a wide variety of 18th century period life is revealed. New Windsor Cantonment site staff is present to perform blacksmithing, and military medicine throughout the weekend. The new exhibit galleries provide an overview of life at the New Windsor Cantonment and 18th century artillery.

The variety of dress worn by participates provides a living window to the past. Green-coated Loyalists, Germans in blue, collectively called Hessians and British regulars in red, stand poised to defend the interests of the King and Parliament. Among the Patriot forces, you will find not only Continentals, like the Light Infantry, dressed in blue coats as they would have been at the Battle of Yorktown, Virginia, in 1781, but also regiments in gray, brown or whatever color happened to be available at the time.

In addition to the special programs and activities, the National Purple Heart Hall of Honor and the New Windsor Cantonment Visitor Center are open. These buildings feature the story of the Purple Heart, the history of the New Windsor Cantonment, Revolutionary War artifacts and the exhibit The Last Argument of Kings, Revolutionary War Artillery. A picnic grove is available and there is free parking.

The site is open to the public Saturday April 28 and Sunday April 29 from 10:00 to 5:00 PM. On Sunday the visitor center does not open until 1:00 PM. For more information please call (845) 561-1765 ext. 22. Admission is free. The New Windsor Cantonment is co-located with the National Purple Heart Hall of Honor on Route 300 (Temple Hill Road) in the Town of New Windsor, four miles east of Stewart Airport and three miles from the intersection of I-87 and I-84 in Newburgh, New York.