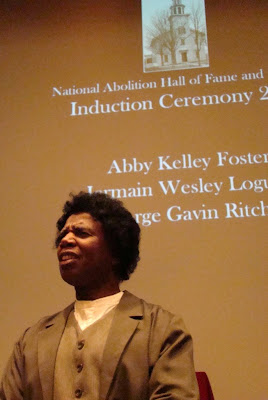 As Black History month commences, Peterboro, NY (in Madison County) is finalizing plans for 2012 programs that explore and explain the 19th Century history of African-Americans in the hamlet and its significance to the history of our nation.

On January 31st, the anniversary date of the Thirteenth Amendment that abolished slavery, the National Abolition Hall of Fame and Museum Traveling Abolition Museum exhibit was transported from Case Library at Colgate University to Memorial Library at SUNY Cortland for Black History Month.

The exhibit had been installed at Colgate for Martin Luther King Jr. commemorations at the college. Milton C. Sernett Ph.D. professor emeritus Syracuse University developed the text and visuals for the traveling museum that cover the history of American Abolition from slavery in the Colonial era to the Civil War.

Dr. Sernett, a member of the Cabinet of Freedom for the National Abolition Hall of Fame and Museum (NAHOF) in Peterboro, will also be presenting at SUNY Cortland on the Abolition Crusade in Upstate New York. Robert Djed Snead, a Jermain Wesley Loguen reenactor who performed at Loguen’s NAHOF induction in October 2011, will perform and present Loguen at SUNY Cortland. For the same month The History Center in Ithaca will be hosting the John Brown Lives! Timbuctoo exhibit during Black History Month. Timbuctoo explains Gerrit Smith’s plan to gift 3000 African-American men with 40 acres of land.

The 20th Annual Peterboro Civil War Weekend June 9 and 10, 2012 will join in the nation’s commemoration of the Sesquicentennial of the Civil War. Military battles were not waged on Peterboro soil, but Peterboro was the center of human rights activities that waged war against slavery, and those activities led to the ignition of the Civil War. Dr. Sernett will present The Terrible Swift Sword: Abolitionists and the Civil War. Also, Alice Keesey Mecoy, will return to NAHOF to share insights into her great, great, grandfather John Brown. NAHOF will exhibit a copy of the Preliminary Emancipation Proclamation gifted by the New York State library. Lincoln presented his draft of the Preliminary Emancipation Proclamation to his Cabinet on September 22, 1862. The New York State Museum will open an exhibit on September 22, 2012 about the Proclamation which was briefly owned by Gerrit Smith of Peterboro.

Sunday, July 1 at 2 p.m. at the Smithfield Community Center in Peterboro Dr. David Anderson of the Akwaaba Program at Nazareth College will portray Frederick Douglass’ in the delivery of Douglass’ famous Fifth of July speech. Saturday, August 4 the third annual 21st C. Emancipation Day will be held in Peterboro. On Sunday, August 5 Lesley Still Gist will detail the famous Underground Railroad work of William Still and his reunion with his long lost brother Peter Gist who came to Peterboro to seek help from Gerrit Smith. Saturday, August 18 at 7 p.m. Hugh Humphreys will present on the great Cazenovia protest against the 1850 Fugitive Slave Law.

The National Abolition Hall of Fame and Museum Commemorations October 20, 2012 at Colgate University include the unveiling of Jermain Wesley Loguen’s banner for the Hall of Fame, as well as that of Abby Kelley Foster and George Gavin Ritchie for their risk-laden pursuit of freedom for slaves. Loguen’s afternoon symposium will be presented by Robert Djed Snead, and Snead will also re-enact Loguen during the evening celebrations.

For more information refer to www.sca-peterboro.org, www.AbolitionHoF.org or 315-366-8101 as the season progresses.