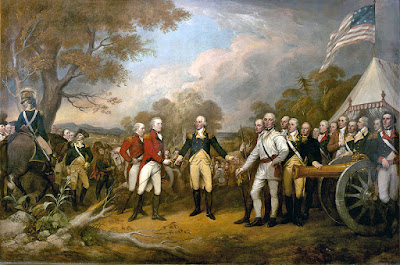 The Friends of Saratoga Battlefield have been awarded a $38,000 grant from the Alfred Z. Solomon Charitable Trust for the design and fabrication of a classic brass or bronze bas relief sculpture replicating the famous painting by John Trumbull (1756–1843) celebrating the Revolutionary War victory at Saratoga. It is expected to be a major part of the cultural landscape development of the historic “Sword Surrender Site” on the west side of Route 4 just south of Schuylerville.

Friends’ President Tim Holmes said, “The Solomon Trust grant will jump-start the magnificent cultural landscape plan by Saratoga Associates for this key historic site recently purchased and protected by the Open Space Institute. With our many partners we will commence the first stages of development to include a memorial wall, interpretive kiosk and a sculptural bas-relief of John Trumbull’s iconic painting The Surrender of General Burgoyne which stands in the U.S. Capitol as one of four scenes depicting the birth of American independence.”

The historic 19-acre site is where British General John Burgoyne surrendered his sword to American General Horatio Gates in 1777, marking the “Turning Point of America’s Revolutionary War.” It will be a key feature for heritage tourism in the area, linking Saratoga Battlefield to sites in Schuylerville and Victory where the British retreated before their surrender. A broad alliance is raising awareness of the impact of the
Battles of Saratoga on the region. It is being advanced by the Historic Saratoga-Washington on the Hudson Partnership, an entity created through cooperative action in the State Senate and Assembly to support local efforts through a voluntary framework of public and private groups.

The scene of the surrender of the British General John Burgoyne at Saratoga on October 17, 1777, painted by Trumbull in 1822, shows American General Horatio Gates, who refused to take the sword offered by General Burgoyne, and, treating him as a gentleman, invited him into his tent. All of the figures in the scene are portraits of specific officers (from left to right, beginning with mounted officer):

A full key to those depicted in the painting is available here.

John Trumbull was born in Connecticut, the son of the governor. After graduating from Harvard University, he served in the Continental Army under General Washington. He studied painting with Benjamin West in London and focused on history painting.

To find out more about the grant or the Friends of Saratoga Battlefield, call Tim Holmes at 518.587.9499