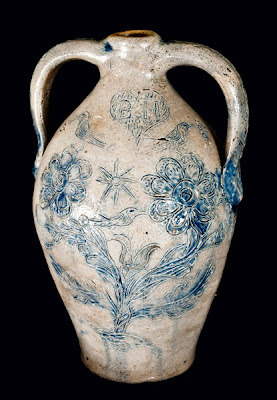 After hiding away in private collections – and a California coat closet – for nearly 200 years, a unique piece of early American decorative art is returning home to New York, where it will be housed at the New York State Museum thanks to collector Adam Weitsman. Weitsman, President of Upstate Shredding, also donated a monumental jug, two water coolers considered important by the museum and a gallon jug decorated with the image of a ship.

“The addition of these recent pieces of decorated stoneware surely put the New York State Museum on the map as having the premier collection of American stoneware. Not only are the decorations unique and outstanding as works of American folk art, but the documentation and history of these recent acquisitions enable us to learn so much more about the stoneware industry and those artists who left us such remarkable works of art,” said John Scherer, Historian Emeritus of the New York State Museum. 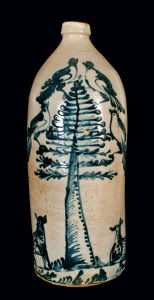 Weitsman has made a number of donations to the museum in the past, and a Herington incised jug will be an important &#8211 and valuable &#8211 addition to the collection.

A double-handled, profusely decorated stoneware jug is among the latest items Weitsman has donated. Inscribed &#8220BENJAMIN HERINGTON,” it was bought at auction for what was, at the time, a record-breaking $138,000. The jug, considered by some a masterpiece, was made as a memorial to a 22-year-old potter who drowned in the Norwich, Connecticut harbor in 1823.

The double-handled jug joins two other pottery donations from Weitsman, including a 21 1/2 inch tall jug made in Poughkeepsie in the mid- to late-1800s, and a one-gallon stoneware jug decorated with the image of a ship, made in New York State between 1835-1846. The new acquisitions also include two water coolers made by Jonah Boynton of Albany purchased from New York City dealer Leigh Keno.

Stoneware was an integral part of the history of New York State and the expansion of the country in early days of exploration and settlement. In a time before refrigeration, stoneware was used to store and transport foodstuffs and drinking water. Clay deposits ideal for making stoneware were found around New York State, notably in what is now New Jersey, lower Manhattan and eastern Long Island. New York State became a large stoneware producer and artisans in New York developed durable vessels decorated with rich designs using incision techniques and distinctive rich blue coloring. 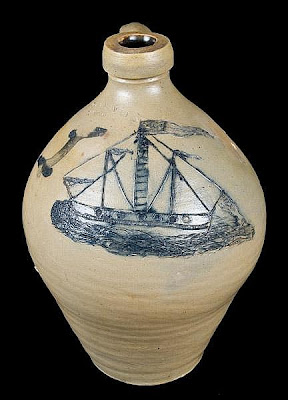 Weitsman began collecting American stoneware at age 11 and made his first donation of more than 120 pieces to the museum in 1996. In a 2009 article for Antiques and Fine Art Magazine, ‘Art for the People: Decorated Stoneware from the Weitsman Collection,’ Scherer wrote, “Since his initial donation Weitsman has continued to add at an aggressive pace to the museum’s holdings, making it the premier collection of American decorated stoneware in the country.”

The Weitsman Stoneware Collection is available can be viewed by the general public at the New York State Museum in Albany, New York.