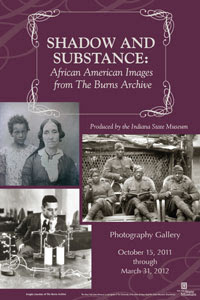 A new exhibition &#8211 Shadow and Substance: African American Images from The Burns Archive &#8211 has opened at the New York State Museum, showcasing rarely-seen photographs from one of the largest private photography collections in the world.

Open through March 31, 2012 in the Photography Gallery, the exhibition allows the viewer to perceive how African-Americans were seen by others and how they wished to be seen. These images do not tell a complete story of the past, but their eloquent shadows provide unique glimpses into the lives of African-Americans over the past 160 years.

The 113 images in Shadow and Substance include portraits, snapshots and photographs of celebration, tragedy and quiet joy, work and family, strength and perseverance. From early images of slaves and Civil War soldiers to new voters and political activists, the exhibition is filled with illustrations of achievement and shocking evidence of intolerance. Some images may not be suitable for young children.

The images were culled from the comprehensive Burns Archive of Historic Vintage Photographs that include specializations in medical and health care, death and dying, sports and recreation, in addition to images of African-Americans. The collection was amassed by Dr. Stanley B. Burns, an ophthalmologist, collector and curator in New York City who was the founding donor for several photography collections, including those of the J. Paul Getty Museum and the Bronx Museum of the Arts. Burns has authored several books including “A Morning’s Work: Medical Photographs from the Burns Archive & Collection, 1843-1939”- “Sleeping Beauty: Memorial Photography in America” and “Forgotten Marriage: The Painted Tintype and Decorative Frame, 1860-1910.”

The traveling exhibition is organized by the Indiana State Museum and curated by Dr. Modupe Labode, assistant professor of history and public scholar of African-American History and Museum Studies at Indiana University.

The State Museum is a program of the New York State Education Department’s Office of Cultural Education. Located on Madison Avenue in Albany, the Museum is open Monday through Saturday from 9:30 a.m. to 5 p.m. It is closed on Thanksgiving, Christmas and New Year’s Day. Admission is free. Further information about programs and events can be obtained by calling (518) 474-5877 or visiting the museum website at www.nysm.nysed.gov.