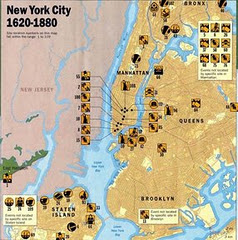 The Historic Districts Council has announced a series of Films, lectures and discussions on NYC’s sites Associated with the Labor Movement. The series of programs will explore New York City’s 19th and 20th century buildings where laborers and organizers lived, worked, and staged notable events related to the labor movement. Participants will learn about the history and future of New York’s labor buildings – including homes, factories, and public squares – and discover the preservation efforts currently underway to save some of these spaces.

Tickets for the entire series are available for $55/$35 for Friends, seniors & students. Advance reservations are required. Tickets can be ordered by visiting or contacting www.hdc.org, 212-614-9107 or [email protected]

This panel will examine the built environment of the labor movement, discussing how and why to preserve significant buildings and sites associated with labor history. Panelists will delve into both cultural and social history such as waterfront laborers and the labor movement among different immigrant groups. Speakers include historians Joyce Mendelsohn and Richard A. Greenwald- and novelist and essayist Peter Quinn, chronicler of Irish-America.

Resistance in Film: Screening of On the Waterfront with discussion

The industrial history of New York City dominated the city’s commerce for more than three centuries. Elia Kazan’s acclaimed film, On the Waterfront, depicts midcentury working conditions along the mob-controlled piers of the Hudson River. The film is based on a 24-part Pulitzer prize-winning series in the New York Sun exposing corruption and racketeering characterizing operations on the water. Noted architectural historian Francis Morrone will speak after the film about its significance in New York City history and culture.

Sunday, November 13, 10:30am, the exact location for the tour will be announced upon registration.Tour lasts approximately two hours.

Fee: $35 for general public/$25 for Friends, seniors & students
Greenwich Village has a long and distinguished involvement in American Labor History. This walking tour will address the 10,000 marchers in the first Labor Day Parade (1882), the Socialist-led Rand School of Social Science, the founding site of the ILGWU, the Triangle Shirtwaist Factory Fire, the Uprising of 20,000, the Catholic Worker, Cooper Union, and sites associated with Emma Goldman, John Reed, Margaret Sanger, Clara Lemlich, and Samuel Gompers. Come learn from Justin Ferate, one of New York City’s foremost tour guides, about these significant sites.