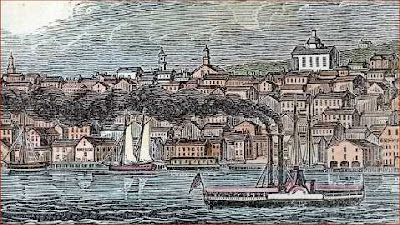 October is Archive Month in New York State. The celebration raises several issues regarding the meaning of archives in state history: financial, technological, and promotional.

In response response to my recent posts (Parts 1, and 2) on Irene and New York State History, I received the following email from Mary McTamaney, Newburgh City Historian, in Orange County in the Hudson Valley that combined archives, the economy, and the flood:

&#8220What a moving and heartfelt story you have written about the devastation in the Mohawk Valley! Thank you.

Is there any clearinghouse statewide to gather such stories of the damage to primary documentary sources that are brought on by Mother Nature and by the poor budgets that fail us in our desired care of our historic resources?

The economic crisis, I think, has been as harmful to us who work with documentary heritage as recent storms.

Here in Newburgh, our city is shrinking drastically in human and physical resources. In the summer 2011, it moved the city’s archives to a basement which has now suffered two small floods. Water was cleaned up before serious damage, but only with quick work by the records manager and nearby volunteers since all public works laborers were laid off last year! I work in an 1841 courthouse that will be closed in December because the city can’t afford to heat, light and maintain it. Places like these for storage, maintenance, access and research are dwindling from money woes along with climate woes.&#8221

Undoubtedly there are many similar stories which could be told about archives throughout the state. Perhaps a survey has been taken on the status of archives at the government and not-for-profit organizations which maintain records. It is definitely a topic to be addressed at the state level.

This leads to a second issue: how are the records to be maintained. This Thursday when I do an archeology enrichment program for 5th graders, I will hold up a 5 1/4&#8243- floppy diskette and ask them what it is. Few if any kids will get it right. Certainly there will be no computer in the classroom which can hold one. Same for 3.5&#8243- diskettes. Remember when they were state of the art? Now try to use one. There was an NCIS show where technological-dinosaur Gibbs had to explain to computer-hot-shot McGee how microfilm worked &#8230- from the time before those little dodads, meaning flash drives existed. How many people saved a URL after Obama won the presidency? How many saved a newspaper or a magazine or both? Why?

This Sesquicentennial, we honor the Civil War veterans by reading their letters and diaries. How if at all will the emails and tweets of the soldiers be saved to provide that first-hand view of the wars we fight today? Hard copy is real in a way digital is not. As we touch it, it touches us. Watch the people do the rubbings at the Ground Zero Memorial or the Vietnam Veterans Memorial Wall. Touch is part of who were are. It connects us through time and space.

This leads to the third issue: does the public care about archives? If New York State set standards for all levels of government and historical organizations, it would be an unfunded mandate. While some funding is available, it is not enough to cover all the needs. Watch what happens when Dutchess County tries to build a county archive facility! So if there are high school students looking for a civic service program, try contacting your local historical society or your municipal historian. Hold the past in your hands and help your fellow citizens try to preserve the memory for generations to come. Maybe even as you help to preserve it, you will learn something about your community at the same time&#8230-even if it is only the report cards of your parents!

4 thoughts on “Mary McTamaney:Archive Month, The Economy, and Irene”