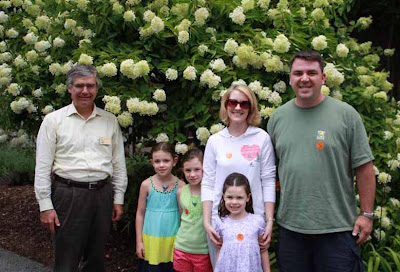 The Adirondack Museum at Blue Mountain Lake, New York welcomed its 4 millionth visitor, Katie Alexander of Ewing, N.J., on August 16, 2011. Katie was accompanied by her parents, Daniel and Jean, and sisters, Emma and Hannah. To recognize this milestone in their fifty-four year history, the museum provided its special and significant visitor with a membership for her family and a $100 gift certificate to the Museum Store.

The Adirondack Museum, which opened to the public in 1957, is a regional outdoor history museum that has been sharing the stories of the region with more than 70,000 visitors each year. The museum has grown from one building in 1957 to more than 22 indoor and outdoor exhibit spaces today. Offerings include continuously changing exhibits, public programs, lectures, field trips, and school programs.

The Adirondack Museum, accredited by the American Association of Museums, tells stories of the people &#8211 past and present &#8212- who have lived, worked, and played in the unique place that is the Adirondack Park. History is in our nature. The museum is supported in part by public funds from the New York State Council on the Arts, a State Agency. For information about all that the museum has to offer, please call (518) 352-7311, or visit www.adirondackmuseum.org.