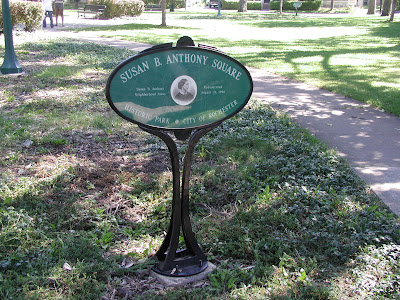 The annual 19th Amendment Festival will be held on Saturday, August 20, 2011 from noon to 5 p.m., in the Susan B. Anthony Park between Madison and King streets in Rochester.

Music and entertainment in the park will be provided by the Hochstein School of Music and Dance as well as the Genesee Harmonic Society of the Genesee Country Village and Museum. Authentic nineteenth-century base ball demonstrations will be provided by Genesee Country Village’s women base ball team, in period costumes, following the rules and etiquette of the game as it was played in the 1800s.

Walking tours of the historic 19th century Historic Preservation District will also be offered. Tours of the Anthony House will be available beginning at 11 a.m. at the special admission price that day only of $5.00 for all ages. Food and craft vendors will be set up in the park.

One thought on “19th Amendment Festival in Susan B. Anthony Park”