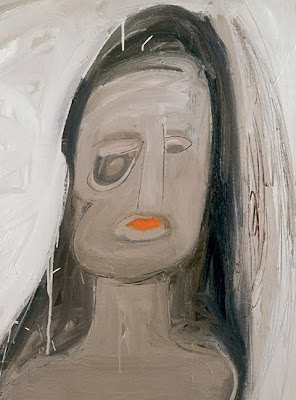 Eva Hesse Eva Hesse Spectres 1960, an exhibition of rarely seen paintings by the artist Eva Hesse (1936-1970), will be presented in the Brooklyn Museum’s Elizabeth A. Sackler Center for Feminist Art beginning September 16, 2011. Created when Hesse was just 24 years old, this group of eighteen semi-representational oil paintings, while standing in contrast to the works for which she is well known, nonetheless constitutes a vital link to her later Minimalist sculptural assemblages. Although several recent museum exhibitions of Hesse’s work have featured a few of these paintings from 1960, none have considered them as a group, all together.

There are two distinct groups within the Spectres series. In the first, the paintings are intimate in scale and the loosely rendered figures are gaunt, standing or dancing in groups of two or three yet disconnected from one another. The second group, in traditional easel-painting scale, presents both odd, alien-like creatures and certain depictions that resemble the artist herself.

The exhibition considers these evocative, spectral paintings not merely as self portraits but as states of consciousness&#8211thereby opening a dialogue about Hesse’s aspirations versus the nightmares and visions that remained constant throughout her life. Working against critical commentary that has seen these works as abject exercises in self deprecation, Eva Hesse Spectres 1960 examines them as testimony of private struggle.

Born in Hamburg in 1936, Eva Hesse and her family left in 1938 to escape the fate of Germany’s Jews and settled in New York City. She was determined to become an artist from an early age, striving at first to be a painter. Later she began to create startlingly original sculptural configurations that exploited the properties of cheesecloth, rubber, plastic, tubing, cloth, and other materials. Hesse achieved a level of success attained by few women of the time. In 1963 she had her first solo show- by 1968 she had gallery representation. She died in 1970 of a brain tumor. Two years after her untimely death, the Guggenheim Museum held a retrospective of her work&#8211its first for a woman.

Eva Hesse Spectres 1960 was organized by E. Luanne McKinnon, Director of the University of New Mexico Art Museum, Albuquerque. The Brooklyn Museum presentation is organized by Catherine Morris, Curator, of the Elizabeth A. Sackler Center for Feminist Art. The works in the exhibition come from both public and private collections.

The exhibition is accompanied by a catalogue co-published by the University of New Mexico Art Museum and Yale University Press (2010). It includes color reproductions of all of the works in the exhibition, along with new scholarship in four essays by: E. Luanne McKinnon, Director, University of New Mexico Art Museum, Albuquerque- Elisabeth Bronfen, Global Distinguished Professor of German, New York University, and Chair of American Studies, University of Zurich- Louise S. Milne, Lecturer at the Napier University and the Centre for Visual Studies, Edinburgh College of Art- and Helen Molesworth, Chief Curator, Institute of Contemporary Art, Boston.

Eva Hesse Spectres 1960 is organized by the University of New Mexico Art Museum, Albuquerque, in collaboration with the Estate of Eva Hesse.