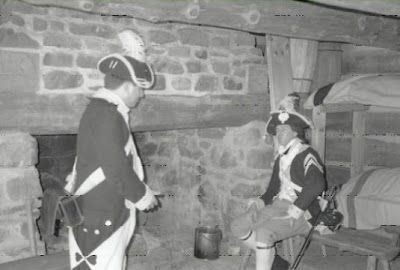 Saturday, August 13 from 7:00 to 9:00 PM, at the re-created huts, administered by the Last Encampment of the Continental Army, on the west side of Route 300 and on the north side of Causeway Road, visitors will be able to interact with soldiers and their family members as they prepare, in the late spring of 1783, for the end of the encampment. After 8 years of war, most of the army will finally be allowed to go home, but some soldiers had to remain under arms until the British evacuated New York City. There was tension in the air. Knowing that their time was short, soldiers lashed out at their officers. One, they hung in effigy. Causing further resentment, the soldiers would not receive their long overdue pay, only certificates for three months pay, redeemable in six months.

Visitors will be bale to tour the encampment grounds by the glow of tin lanterns. See military drills and musket firings, maybe even join-in a demonstration with wooden muskets. Following the capture of British forces by the allied armies of France and America, at Yorktown, Virginia, in the fall of 1781, the northern Continental Army returned to the Hudson Highlands. The destruction of the principal British field army in the south broke England’s will to continue the struggle. In the fall of 1782, near New Windsor, 7,500 Continental Army soldiers built a city of 600 log huts near New Windsor. Along with some of their family members, they braved the winter and kept a wary eye on the 12,000 British troops in New York City, just 60 miles away.

The event is co-sponsored by the National Temple Hill Association and New Windsor Cantonment State Historic Site. The National Temple Hill Association administers the Last Encampment of the Continental Army for the Town of New Windsor and owns the historic Edmonston House. New Windsor Cantonment State Historic Site is part of the Palisades Interstate Park Commission. The Palisades Interstate Park Commission administers 27 parks, parkways and historic sites for the Office of Parks, Recreation and Historic Preservation in New York as well as the Palisades Interstate Park and parkway in New Jersey. For more information about New York State parks and historic sites. Visit their website at www.nysparks.com and follow the links for historic sites.

Photo: Two Soldiers of the Massachusetts Line, in a Hut, at the Last Encampment of the Continental Army, New Windsor, New York.