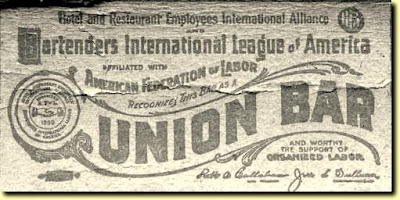 In 1889, in response to growth in the number of labor unions, New York State passed a law offering unions an opportunity to register their labels, names, brands, or other devices with the Secretary of State. It was thought that this procedure of officially recognizing the uniqueness of each labor association or union logo would help avoid the confusion that might result from similar designs.

The law was amended in 1943 to substitute the Department of Labor as the registering agency. Hundreds of labels were registered during the period from 1901 to 1942, the time period represented by a new collection of online images hosted by the New York State Archive [link].

Most union labels were made of paper and usually fairly simple in design- a few were colorful and elaborate. One of the devices registered was a branding iron designed to literally &#8220make an impression.&#8221 However, the labels were intended to do more than just identify an association of people who made a particular product or service- all projected, explicitly or implicitly, the pride that members had in their trade, while encouraging solidarity with workers everywhere.