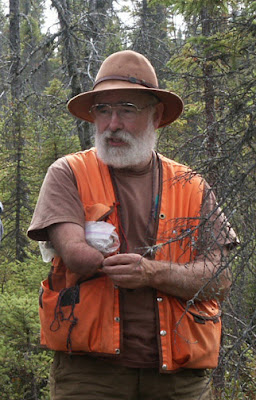 The Board of Trustees of the Adirondack Museum at Blue Mountain Lake, New York has announced the selection of Jerry Jenkins as the recipient of the 2011 Harold K. Hochschild Award.

The Adirondack Museum will formally present Jerry Jenkins with the Harold K. Hochschild Award on August 4, 2011.

Jerry Jenkins is an ecologist with the Wildlife Conservation Society’s Adirondack Program (WCS). An accomplished botanist, naturalist and geographer, he has almost forty years of field experience working in the Northern Forest. Over the course of his career, his work has included conducting biological inventories for The Adirondack Chapter of the Nature
Conservancy, surveying rare plant occurrences for the State of Vermont, chronicling the environmental history of acid rain with the Adirondack Lakes Survey Corporation, and understanding and interpreting historical changes to boreal lowland areas in the Adirondacks with WCS. His enthusiasm for natural history has also led him to study plant diversity and distribution across various forest types &#8211 from the Champlain Hills to large working forest
easements, and from old growth forests to high elevation alpine communities.

His most recent and notable accomplishments with the Wildlife Conservation Society are his collection of Adirondack publications. Together with Andy Keal, Jerry Jenkins co-authored The The Adirondack Atlas: A Geographic Portrait of the Adirondack Park, considered one of the most significant Adirondack book in a generation. Some 300 pages in length, the Adirondack Atlas contains 750
maps and graphics, and represents the most comprehensive collection of regional data brought together in a single source. The park’s geology, flora and fauna are featured, as well as the history and the dynamic nature of the park’s human communities. Bill McKibben describes the atlas as a &#8220great gift&#8230-that marks a coming of age.&#8221

In his newest book Climate Change in the Adirondacks the Path to Sustainability, Jenkins demonstrates how climate change is already shifting the region’s culture, biology and economy, and provides a road map towards a more responsible and sustainable future. He provides the first comprehensive look at both the impacts of, and the potential solutions to, climate change across the Adirondack region. This compilation, along with his other regional contributions, prompted Bill McKibben to offer that &#8220Jerry Jenkins has emerged as the information source for our mountains&#8230-and we are all in his debt.&#8221