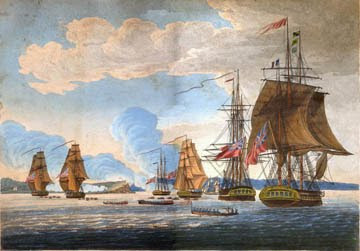 It’s “a once-in-200-years” opportunity. The Seaway Trail Foundation is asking quilters and non-quilters, to make quilts with War of 1812-era colors and patterns for the Great Lakes Seaway Trail 2012 War of 1812 Bicentennial Quilt Show and Challenge event.

Organizers are reaching out to American history enthusiasts and re-enactors, children and people of all ages from the U.S., Canada, United Kingdom, Native nations, and internationally to enter and attend the commemorative event to be held March 17-18, 2012 at the Great Lakes Seaway Trail Discovery Center in the War of 1812 heritage community of Sackets Harbor, New York.


Guidelines for making “cot to coffin”-size (30 inches x 70 inches) quilt using a variety of fabrics, including cotton, linen, silk, wool and linsey-woolsey, and patterns common to the 1812 period are online. Entries must be committed to the show by January 15, 2012- quilts must be completed by March 3, 2012.

Brackman of Lawrence, Kansas, suggests that a quilt in medallion or strip format would be a good patchwork design for the historical era. Brackman says, “Patterns that were popular during the 1812 time were simple stars and basic nine-patch and four-patch variations. The War cut into fabric imports into America but well-to-do women already had stashes of imported French, English and Indian chintzes and calicoes in a variety of colors, and loved to mix large-scale and small-scale prints. For those thinking of using fabric reflecting the domestic prints of the time, indigo blues, browns and a touch of pink would be among the best colors.”

Brackman has designed a reproduction collection of prints from the era for Moda Fabrics- the “Lately Arrived from London” collection should be available in quilt shops by the end of the summer of 2011.

The Seaway Trail Foundation is sponsoring the event as part of a host of War of 1812 Bicentennial commemorative plans for tourism, cultural heritage and military history programs in 2011-2014. The March 2012 show will be the kickoff for a 2011-2014 traveling educational exhibit of the War of 1812-like quilts.

Illustration: War of 1812 attack on Oswego from the Paul Lear collection.