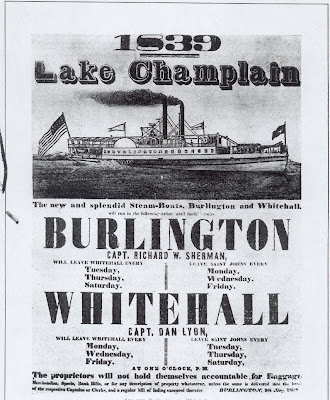 One hundred and sixty-six summers ago&#8211 one year after fugitive slave Frederick Douglass lectured in Keeseville&#8211Albany Underground Railroad agent Abel Brown “took” the Burlington steamboat on Lake Champlain and reported, “Many a slave has enjoyed the indescribable pleasure of leaping from the liberty-loving Burlington.&#8221

Hundreds of fugitives from slavery escaped every year to New York City. They were forwarded to Albany and onto Champlain Canal packet boats. At Whitehall they boarded the Burlington. From Port Kent, they could make their way to Keeseville and Stephen Keese Smith’s farm in Peru. Smith hid fugitives from slavery in his barns and drove them in his uncle’s wagon to Champlain. Then Noadiah Moore took them across the border to Lacolle, Canada, and helped them find work. They were free, at last.

People opposed the abolitionists. Friends and neighbors turned against them. Brethren left their churches.

On August 14th, North Country Underground Railroad Historical Association’s President, Don Papson, will lead a guided tour, “Villages and Churches Divided.” The tour will begin with a 10 am orientation in Keeseville’s Ausable Valley Grange at 1749 Main Street. Stops will be made at abolition and UGRR sites where participants will read passages from historic documents. The trial of Rev. Andrew Witherspoon and the stirring words of Frederick Douglass will be relived. The last stop at 3 pm will be at a hidden room. Participants must apply early as the tour is limited to 20 people. The cost is $30 for members of NCUGRHA- $40 for non members. Each participant is asked to pack a lunch, wear walking shoes and bring an umbrella. To register, please contact Helen Nerska at 518-643-0938 or email [email protected]