What follows is a guest essay by Thomas Hughes, Director of the Crown Point State Historic Site on Lake Champlain in Essex County, NY. The site includes two National Historic Landmarks: the ruins of French-built Fort St. Frederic (1734-59) and the ruins of Crown Point’s British fort (1759-73).

Dedicated 100 years ago this month on July 5, 1912, and located at a prominent site that is steeped in history, the Champlain Memorial Lighthouse serves as a monument to the 1609 voyage on Lake Champlain by French explorer Samuel Champlain.

This Champlain Memorial rises from a small point of land just southeast of the Lake Champlain Bridge. In July 1609, Samuel Champlain was the first European to record seeing this majestic lake which he named for himself. Late that month, Algonquin, Huron, and Montagnais Indians in canoes guided Champlain and two fellow Frenchmen southward from the St. Lawrence River region onto Lake Champlain, so that the three Europeans might join the Algonquins in a military engagement against the Algonquin’s Iroquois enemies. A battle took place (perhaps near the present-day site of the lighthouse), the arquebus firearms used by the three Frenchmen proved decisive, and the Algonquins and French returned northward.

Over 100 years later, the French built a fortified windmill here (circa 1737), as part of their Fort St. Frederic military and civilian complex. The windmill ground grain for the fort garrison and for the nearby French civilian population but also served as an outer military defensive structure in that the windmill was fortified with cannons. The French blew up their windmill in late-July 1759, as the French military abandoned Fort St. Frederic to the advancing British army. In August 1759, when the British began to build a vast Crown Point fort, to be their primary fortification on Lake Champlain, the lighthouse site was chosen for one of their outer forts, the Grenadier Redoubt. Remains of part of the Grenadier Redoubt can still be seen today, immediately south of the lighthouse.

On May 12, 1775, during the outbreak of the War for Independence, a few British soldiers at Crown Point were captured by 100 “Green Mountain Boys” (from the Hampshire Grants) under the command of Seth Warner. In addition to taking the strategic location from the British, the rebels liberated a great prize: 111 British cannon.

In time for the 300th anniversaries in 1909, the States of New York and Vermont each established tercentennial commissions to organize events to celebrate Champlain’s lake voyage. The festivities that the commissions organized commenced at Crown Point on Monday, July 5, 1909 with an address by New York State Governor (Glens Falls native and future U.S. Supreme Court Chief Justice) Charles Evans Hughes, Indian pageants, and fireworks.

Besides planning the week-long celebration, the commissions from New York and Vermont also desired to erect a suitable and permanent memorial to Champlain. One suggestion that appeared in a local newspaper as a Letter to the Editor was to convert an existing lighthouse into a memorial. Incorporating the memorial with a lighthouse seemed a fitting way to commemorate an explorer and navigator of Champlain’s stature. Various sites on Lake Champlain (including Cumberland Head, Plattsburgh, Isle La Motte, Bluff Point, Split Rock, Rock Dunder, Ticonderoga, Mount Defiance, and Juniper Island) were considered for the memorial before the two commissions, with the blessing of the U.S. Lighthouse Service, agreed in 1910 on Crown Point.

According to the Ticonderoga Sentinel (page one, October 13, 1910), “The Memorial Committee of the Lake Champlain Tercentenary Commission, appointed from New York and Vermont, announced [on Wednesday, October 5, 1910] that the permanent memorial to Samuel Champlain, discoverer of Lake Champlain, would probably be a lighthouse instead of a memorial statue or monument …The expense of the memorial is $76,000. … The members of the committees were guests … Wednesday on board the steamer Vermont, and the members of the association viewed the proposed site that day.”

With $50,000 in funds set aside from the Tercentennial Commissions, work began on the memorial to Champlain and his exploration of the lake. The memorial was designed by Dillon, McClellan, and Beadel. The Champlain Memorial is classical and French Renaissance in style, with heavy stone columns, entablature, ornamental frieze and setbacks. The limestone exterior of the lighthouse was replaced with eight Roman Doric columns resting upon a conical base made of Fox Island granite from Maine. An ornate cornice, parapet, and lantern room were also added to complete the memorial. Parts of the foundation, the interior brick, and the cylindrical shaft holding the spiral stone staircase remain from the 1858 lighthouse.

In another page one article on June 27, 1912 the Ticonderoga Sentinel announced that “The Champlain memorial, erected on the site of the lighthouse at Crown Point, N.Y., by the states of Vermont and New York jointly through the commissions of the two states, will be dedicated Friday, July 5th. The Hon. H. Wallace Knapp, chairman of the New York commission and Dr. John M. Thomas, president of Middlebury College, a member of the Vermont commission, will present the memorial to the States …, and it will be accepted by Vermont Governor John A. Mead and by New York Governor John A. Dix [Glens Fallsnative]. &#8230- The exercises will begin with prayer by the Rev. Dr. Lewis Francis, of Port Henry. [In addition to the Governors’ remarks,] it is expected that representatives from the British and French embassies atWashington will also be present and make addresses.”

On the side of the memorial that faces Vermont, are bronze sculptures, the largest of which was crafted by German-American Carl A. Heber (1875-1956). It depicts, above the prow of a canoe which appears to be filled with furs, Champlain standing in the center, flanked by a crouching Huron guide and a French Voyageur. These larger-than-life-size figures were cast at the Roman Bronze Works in Brooklyn. 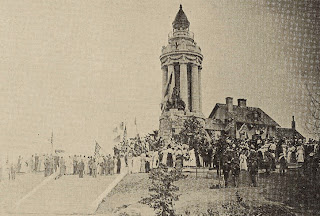 Two months before the July 1912 dedication, France had donated a bronze profile bust (for which sculptress Camille Claudel had been the model), sculpted by the great French artist Auguste Rodin, to be incorporated into the monument. At the dedication of the memorial, the leader of the visiting French delegation remarked “The United States is raising a monument to a Frenchman, and France sends you, through us, her tribute of gratitude.” The Rodin “La France” sculpture remains visible, as located on the memorial exterior, below the larger-than-life sculpture of Champlain.

The construction of the lighthouse memorial was a joint effort of the States of New York and Vermont (two small monuments flanking the lighthouse are inscribed with the names of the tercentenary commissioners) as part
of the 1909-1912 observance of Champlain’s voyage on the lake. On each side of the monument are coats of arms: New France (French North America, 1609-1763), the State of Vermont, France (at the time of Louis XIII), the United States of America, the State of New York, and Brouage (Champlain’s birthplace in France).

With the opening of the nearby Lake Champlain Bridge on August 26, 1929, the usefulness of the light as a navigational aid was short-lived. The lighthouse was taken out of active service circa 1930 and deeded to the State of New York. The light keeper’s wooden Cape Cod-style cottage, attached to the memorial lighthouse, was eventually removed. Today the Champlain Memorial lighthouse is part of the Crown Point Reservation Campground and is open to the public. The lighthouse is under the stewardship of the New York State Department of Environmental Conservation.

A few years ago, government funds were used to repair the covered steamboat pier that was added during the 1930s and to restore the historic lighthouse, a symbol of Crown Point’s history. The restoration of the lighthouse exterior was completed in time for the 2009 quadricentennial celebration of Champlain’s historic voyage and the “La France” sculpture by Rodin was cleaned. On September 19, 2009, this Champlain Memorial was publicly re-dedicated by the states of Vermont and New York. Four weeks later, the Lake Champlain Bridge closed and during 2010 and 2011, a replacement bridge was constructed beside the lighthouse. The Champlain Memorial is visible from a sidewalk on the popular new bridge.

As a monument, the Champlain Memorial is a handsome and fitting tribute- as a lighthouse, the structure is extraordinarily ornamental and unique- as sculpture, the edifice enjoys an abundance of great works of art in bronze. This month, the Champlain Memorial begins its second century of proudly honoring Samuel Champlain, “The Father of New France.”