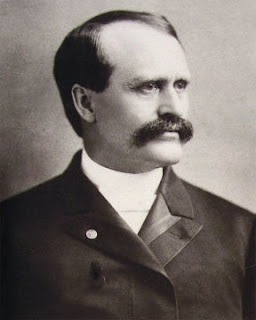 Henry Harrison Markham, a native of Wilmington, New York, expanded his California business connections beyond the Pasadena area’s mines. He was president of the Los Angeles Furniture Company, and a director on the boards of two banks and the Southern California Oil Supply Company. Others like him led a surge of financial prosperity and population growth in southern California. In the upcoming political campaign, the south was hoping to wrest control from the northern power base at San Francisco.Once again, the party turned to Markham, nominating him as the candidate for governor to avoid a party split. In a bitter, hard-fought battle, he defeated San Francisco Mayor E. B. Pond by 8,000 votes to become California’s 18th governor. The victory was attributed partly to Henry’s manner of personally greeting thousands of voters who became well acquainted with the “Markham Glad-hand.” It was his signature move—a firm, hearty handshake evoking sincerity.

While holding office from Jan. 1891–Jan. 1895, Markham did much to advance business in the state. When the Panic of 1893 struck (considered second-worst only to the Great Depression of the 1930s), he backed the idea for the California Midwinter International Exposition (a World’s Fair). With San Francisco as the host city, a massive parade was held. Represented were many businesses, civic organizations, and military groups. A work-holiday was imposed by the governor, to great effect. On the first day alone, more than 72,000 people attended.During his tenure, Markham also handled the effects of a national railroad strike- led the second-largest fundraising effort among states represented at the Chicago World’s Fair in 1893- secured military facilities that brought millions of dollars to California- forced a railroad company to pay $1.3 million it owed the state- helped bring trolley service to Pasadena- backed the building of the Santa Fe Railroad- and worked towards establishing a harbor facility in southern California.Early in his tenure, an interesting meeting occurred when Governor Markham welcomed President Benjamin Harrison on a tour of California. The president was the grandson of another president, William Henry Harrison, and during the trip, California’s new governor revealed a personal connection to the First Family.The elder Harrison’s election platform in 1840 had included tariffs that were meant to protect American businesses. Nathan Markham, an iron manufacturer at Wilmington, was so delighted when William Henry Harrison won the election in 1840, he named his newborn son Henry Harrison Markham. (Unfortunately, the president died after a month in office, the shortest term of any US chief executive.)After a successful four-year stint as governor, Henry Markham decided not to seek a second term, returning to private life and the world of business, where he did well for more than two decades. He died of a stroke in 1923 at the age of 83, but was certainly not forgotten. 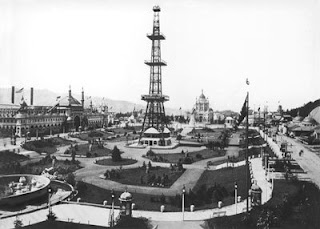 His impressive home was torn down in 1939, but through the years, the Markham Mansion had played host to many grand social occasions, both during his tenure and after his death. The family name also remained a fixture on streets, buildings, and other locations in Pasadena.

In 1963, forty years after the governor’s death, Markham Place was honored by the Pasadena Beautiful Foundation as its first Banner Block. The neighborhood was near Henry’s former mansion and orchard, where many old, beautiful homes had been restored. In 2010, popular tourist destinations include the Governor Markham Victorian District.Was the old neighborhood really that impressive? Next door to Markham was Adolphus Busch (Budweiser, etc.). Nearby was the Gamble family (Procter & Gamble) and Bill Wrigley (Wrigley’s gum). Others locating in that vicinity over the years include the Maxwells (coffee), the Cox family (communications), and the Spaldings (sporting goods). The area was once known as “Millionaire’s Row” in the days when a million dollars suggested exclusivity.And what of that wonderful playhouse so lovingly built by Henry Markham for his daughters? In 1970, the California State Historical Society became aware that after 85 years, it still existed. The family had passed it down so that subsequent generations of children could enjoy it.Wishing to do the same, the owner contacted Governor Markham’s fourth daughter, Hildreth, 81 (born in 1889), obtaining permission to donate it to the Pacific Oaks Children’s School. Soon after, the house (which had been refurbished regularly in the past), was placed in a corner of the children’s play yard at the school, a memento of California’s governor from Wilmington, New York.Photos: Top?Henry Harrison Markham. Bottom?California Midwinter International Exposition, 1894.The story of Henry Markham is one of 51 original North Country history pieces appearing in Adirondack & North Country Gold: 50+ New & True Stories You’re Sure to Love (352 pp.), a recent release by author Lawrence Gooley, owner of Bloated Toe Publishing.