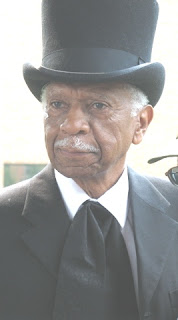 160 years ago the former slave Frederick Douglass was asked to give a speech on the Fourth of July. Douglass refused to speak on July 4, but did deliver a powerfulspeech the day after Independence Day. He asked the audience “What to the Slave is the Fourth of July?” “What have I, or those I represent, to do with your national independence? Are the great principles of political freedom and of natural justice, embodied in that Declaration of Independence, extended to us?” “The blessings in which you, this day, rejoice are not enjoyed in common. The rich inheritance of justice, liberty, prosperity, and independence bequeathed by your fathers is shared by you. Not me. The sunlight that brought light and healing to you has brought stripes and death to me. The Fourth of July is yours, not mine.”

On July 1, 2012 at 2 p.m. at the National Abolition Hall of Fame and Museum (NAHOF) to which Frederick Douglass was the first inductee, David A. Anderson Ph.D. Visiting Scholar at Nazareth College of Rochester will present an oration of Douglass’ speech asking what Independence Day meant to the American slave. A founding member of Akwaaba: the Heritage Associates, Anderson is an interpreter of living history through reenactments that evoke Frederick Douglass, Austin Steward, unheralded escapees, et al. Often the theme addresses the essential role African American Union soldiers played in freeing a people and preserving the Union. He has presented such recreations at symposia in North Carolina, Pennsylvania, New York, Ohio, and in other venues.

Anderson chairs Rochester-Monroe County Freedom Trail Commission, which in 2003, took the lead in staging, &#8220Men of Color, to Arms!&#8221 a conference illuminating Frederick Douglass’ role in overturning policies barring African Americans from the Union Army. In 2007, with the National Underground Railroad Freedom Center inCincinnati, the Commission co-sponsored the Frederick Douglass International Underground Railroad Conference. In June 2009, Anderson joined other honorees at the National Mall in Washington in “Giving Voice: The Power of Words in African American Culture,” an exploration of the expressive power of the creative African American oral traditions in the shaping of American culture.

Douglass spoke at anti-slavery conventions in Peterboro and in the Free Church of Peterboro which Gerrit Smith had established. Douglass worked with Smith in organizing the 1850 Anti-Fugitive Slave Law Convention in Cazenovia, New York. Smith made large and regular donations of money to Douglass in order to keep solvent Douglass’ anti-slavery efforts through his newspapers The North Star and Frederick Douglass’ paper. Douglass dedicated the second edition of his autobiography to Gerrit Smith whom he considered a great man because of his practical efforts to implement universal human rights. Douglass’ relationship with Smith was also on a very personal level. He visited Peterboro often, bringing with him colleagues and other members of his family for extended visits as early as 1835. Following the two o’clock program, Norman K. Dann PhD, a Gerrit Smith biographer, will conduct a tour of Douglass’ steps at the Gerrit Smith Estate describing the relationship between the two men.

This program is supported by a grant from the New York Council for the Humanities for the Abolition Agitation in New York Sparks War for Liberty and Justice for All2012 NAHOF project. Admission to the program and to the exhibits at the National Abolition Hall of Fame and Museum, 5255 Pleasant Valley Road in Peterboro is three dollars and free to students.

The National Abolition Hall of Fame and Museum is included in the Madison County Cultural Heritage Passport with its companion heritage site the Gerrit Smith Estate National Historic Landmark. Both sites are open Saturdays and Sundays form 1 – 5 from May 19 to September 23, by appointment,and for special events. For more information info@abolitionhof.org and 315-366-8101