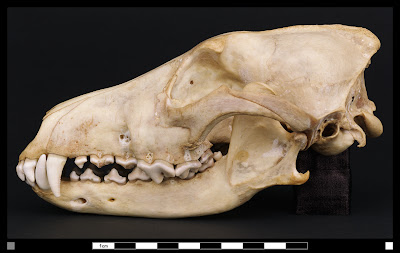 The New York State Museum traces its origins to an 1836 survey of the state’s geology, plants, and animals. To celebrate 175 years of adding to the scientific and historical knowledge of New York, the State Museum presents an exhibition that showcases many of its important collections in anthropology, history, and natural science. The exhibition highlights some of the people who, through their work, built these invaluable collections, and presents examples of continuing research based on the collections. Together, the stories of the collectors, the artifacts and specimens in the collections, and the continuing research illuminate the history of the oldest and largest state museum in the nation.

Photo: The coyote collection includes skins and skulls that document the expansion of coyotes into New York. Shown here is the skull of a coyote-wolf-dog hybrid from New York state. Scientists at the State Museum recently evaluated skulls and genetic samples of New York coyotes and found they have larger and wider skulls because of hybridization
with wolves. The coyote collection is included in From the Collections, an exhibition highlighting some of the State Museum’s important collections and related research.