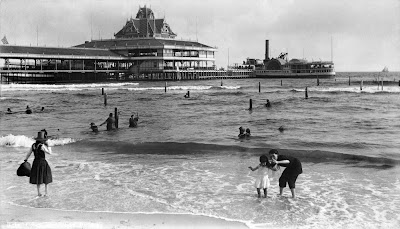 The Chapman Historical Museum in Glens Falls (Warren County) has opened a new exhibit of Seneca Ray Stoddard photographs featuring views of New York Harbor. Taken in the 1880s on his visits to New York City, the fifteen photographs include images of sailboats and steamers in the harbor, people bathing on the beach at Coney Island, the Brooklyn Bridge and other landmarks. A highlight is Stoddard’s famous night-time photo of the Statue of Liberty, captured using magnesium flash powder. The exhibit, planned to coincide with The Hyde Collection’s exhibit, &#8220NY, NY,&#8221 will be on view through September 4th.