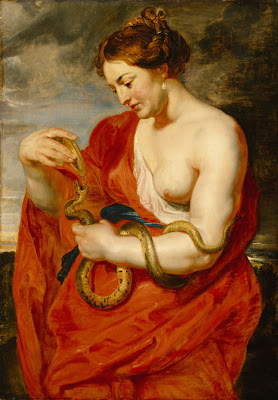 The Hyde Collection in Glens Falls has announced that its prized Christ with Folded Arms by Rembrandt van Rijn is now on display in the Louvre in Paris as part of a landmark exhibition titled &#8220Rembrandt and the Face of Jesus.&#8221

The Hyde masterwork plays a key role in shaping the thesis of the exhibition, which will be seen in three major museum venues. When the exhibition closes at the Louvre, it travels to the Philadelphia Museum of Art where it will be shown from August through October, 2011 and then to the Detroit Institute of Arts for exhibition beginning in February, 2012.

According to David F. Setford, the Hyde’s executive director, “It is seldom that the Museum considers lending this impressive masterwork, but the exhibition being organized by the Louvre offers previously unparalleled opportunities for comparisons with related works from Hygeia4NR.jpgleading museums around the world.” Setford also noted that the exhibition curators specifically requested Christ with Folded Arms because it is “the key image of Christ in Rembrandt’s late work” that “reflects how his idea of Christ had evolved” in a fully realized work.

During the absence of the Rembrandt work, The Hyde will exhibit a painting by the Flemish master Peter Paul Rubens (1577-1640). The work, lent to us by the Detroit Institute of Arts, is entitled Hygeia, Goddess of Health (1615) and depicts the classical goddess of health and the prevention of illness. Hygeia was the daughter of Asclepius, god of medicine and the word hygiene is derived from the goddess’ name. The voluptuous, Baroque figure of a semi-nude female is shown in the glowing, healthy flesh tones synonymous with Rubens and with the subject.

For the duration of the traveling exhibition, Hygeia, Goddess of Health will be on view in the Library of Hyde House where it will allow visitors to compare it with the Museum’s own smaller Rubens Portrait of a Warrior, that also hangs in that room.