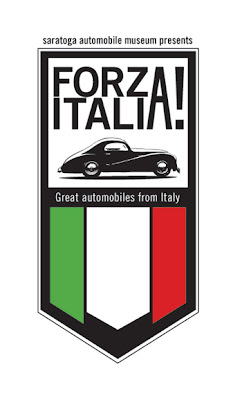 On May 7, 2011, the Saratoga Automobile Museum will debut the exhibit “Forza Italia!, Fine Sporting Cars From Italy.” The exhibit will feature several cars from the renowned Oscar Davis Collection in Elizabeth, NJ. Cars from Mr. Davis’ fine collection, housed in an exclusive private Museum, have appeared at the Pebble Beach Concours d’Elegance, as well as at Amelia Island, Radnor Hunt, and other significant concours events.

Cars expected on display in Saratoga will include a prewar Alfa Romeo 6C1750, a 6C2300 and an 8C2900, along with a sporty Fiat Balilla Spyder. Postwar examples will include a Ferrari 212 Scaglietti Spyder, a Lancia B24S Nardi Spyder America, a Maserati Ghibli SS, a Bizzarrini 5300 Strada, a Fiat Abarth 750 sports coupe, and a Ferrari F40, to name just a few.

Italian vehicles embody everything that’s exciting about a country where speed, head-turning styling and pure sex appeal are standard equipment in every car. The Italian automobile industry has long been one of its country’s greatest, most visible and innovative assets. A major contributor to Italy’s dramatic postwar industrial rebirth, Italian cars continue to set trends and attract countless enthusiasts.

With the Fiat and Alfa Romeo marques returning soon to North America, and considering the present-day strengths of Ferrari, Lamborghini and Maserati, this is a ‘primo’ time for the Saratoga Automobile Museum to present an overview of great vintage Italian Sports and Grand Touring cars.

Open to the public through the Summer Season, the exhibit will end with the acclaimed Second Annual Fall Ferrari Festival, held in cooperation with the Saratoga Performing Arts Center’s acclaimed Wine and Food Festival, scheduled for September 10, 2011.

Adjacent to the Saratoga Performing Arts Center (SPAC) in the Saratoga Spa Park, The Saratoga Automobile Museum is located at 110 Avenue of the Pines, Saratoga Springs, NY. Hours of operation during the summer months are: Open Daily 10 am to 5 pm. †For more information, call 518-587-1935 or visit us on the web at www.saratogaautomuseum.org.