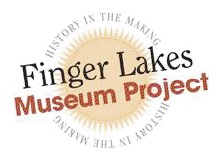 Finger Lakes Museum Board President John Adamski and Finger Lakes State Parks Regional Director Tim Joseph have announced that a ceremony has been scheduled to sign a Letter of Intent to start the process that will enable the Finger Lakes Museum to build its campus in Keuka Lake State Park. A joint Memorandum of Understanding listing the commitments of five other Keuka Lake State Park site sponsors, which were presented in the Site Sponsors’ Proposal last December, will also be signed at the same event. Those members include Yates County, the Town of Jerusalem, Finger Lakes Economic Development Center, Keuka College and the Finger Lakes Visitors Association. A separate agreement with the Yates County Chamber of Commerce will be signed in a few more weeks.

The affair will take place at 11:00 a.m. on Friday, September 17 th at the lakeside
pavilion in Keuka Lake State Park and members of the News Media and the public
are invited to attend this unprecedented event.

The Finger Lakes Museum is an initiative to create a worldclass educational institution to showcase the cultural heritage and ecological evolution of the 9,000
squaremile Finger Lakes Region, since the last glacial recession began some 12,000 years ago. Last April, Keuka Lake State Park was selected as the preferred location to build the project after 19 sites were submitted for evaluation by 8 Finger Lakes counties and the City of Geneva in 2009.

Under the Letter of Intent, the Finger Lakes Museum and the New York State Office
of Parks, Recreation and Historic Preservation will initiate a comprehensive planning
process for the Museum’s facilities at Keuka Lake State Park. The planning process,
which will include public input opportunities and a full environmental review, will
develop a detailed concept design and site building plans.

The Board of Trustees has approved the design of a new logo for the Finger Lakes
Museum, which was created by InHouse Graphics of Geneva and will be unveiled at the event.