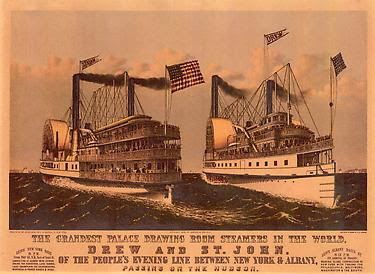 The exhibit Currier & Ives: &#8220Cheap and Popular Pictures&#8221 is now open at the Senate House State Historic Site in Kingston. The prints of Currier & Ives—one of the most successful purveyors of lithographic prints in the 19th Century—are diverse, full of fascinating historical information and compelling imagery, perhaps despite their perennial appearance on calendars and cards. This new exhibit at Senate House State Historic Site, offers us forty of their prints focusing on the ideals, values, and innovations of the 19th Century.

While it’s better known for its buildings and collections representing colonial and Revolutionary history, Senate House State Historic Site, located in uptown Kingston, also has impressive collections of objects, documents, and art of the 19th Century, including over 200 Currier & Ives prints, given to the site by the late Rutgers Ives Hurry, a Saugerties resident whose passion was collecting images of the Hudson Valley made by the firm.

The Senate House exhibition focuses on three themes: the ideal of the 19th-century home, images of New York City, and Hudson River steamboats (both the luxury and potential dangers they represented). The exhibit is entitled &#8220Cheap and Popular Pictures,&#8221 a term touted by Nathaniel Currier and James Merritt Ives, who shrewdly observed and marketed their images&#8211made by many different artists of the day—to the opinions, interests, and ideals of America’s growing middle class.

The Senate House is open Wednesday through Saturday, 10 am to 5 pm, and 1 – 5 pm on Sundays. The exhibit is free and open to the public. The exhibition runs through October 31 and is available by appointment and for school groups after that date. Senate House is located at 296 Fair Street, Kingston NY, 12401. For more information and other details, please call (845) 338-2786.