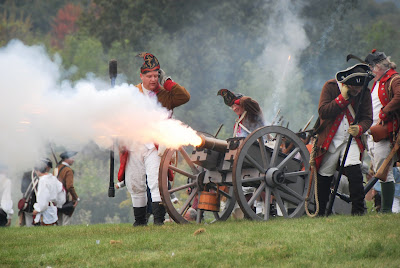 Vast British and American armies struggle for control of the Ticonderoga peninsula and the future of America at Fort Ticonderoga’s Revolutionary War Encampment, Saturday and Sunday, September 11th and 12th, from 9:30 am to 5 pm each day. More than 600 re-enactors bring the American Revolutionary War experience to life for visitors during the weekend, highlighting Fort Ticonderoga’s strategic role in the struggle for liberty. A battle takes place each day at 2 pm and is based on an encounter between advanced British and American forces during General John Burgoyne’s successful capture of the fort by the British in July 1777. Visitors will be able to purchase wares from period vendors, thrill at the pageantry of arms, enlist with the Continental soldiers for a bounty, and participate in a Sunday morning Anglican divine service in the fort at 10:30am.

Beth Hill, Executive Director of Fort Ticonderoga, said this event “will bring to life the hardship, hope, and victory that defined Fort Ticonderoga’s history in the American Revolution.” Highlighted programs throughout the weekend will include Potent Potables: Drink and Sutling in the American Revolution presentations, cooper demonstrations, building field fortifications, daily life of camp followers, field surgery and much more! According to Hill, the weekend “will be an unparalleled opportunity for visitors to be immersed in a place and time that defined America.”

The historic capture of Fort Ticonderoga on May 10th, 1775, by Ethan Allen, Benedict Arnold, and the Green Mountain Boys marked America’s first victory of the American Revolution. Fort Ticonderoga remained a strategic stronghold and key to the continent throughout the early years of the war. In 1777, British forces under General Burgoyne successfully recaptured Fort Ticonderoga, forcing American troops to abandon the fort and Mount Independence across Lake Champlain. During the 18th-century, Fort Ticonderoga was attacked six times in the span of twenty years, holding three times and falling three times.

Fort Ticonderoga is a private not-for-profit historical site that ensures that present and future generations learn from the struggle, sacrifices, and victories that shaped North America and changed world history. Fort Ticonderoga offers programs, tours, demonstrations and exhibits each day from 9:30am-5pm, May 20th- October 20th. A full schedule and information on events, including the upcoming Revolutionary War Encampment on September 11th and 12th, can be found at www.FortTiconderoga.org.