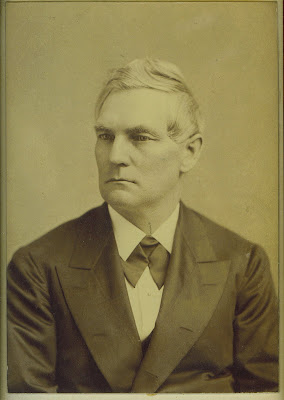 The public is invited to Celebrate the life of Franklin County native and U.S. Vice President William A. Wheeler with the Franklin County Historical & Museum Society and the Malone Lodge of Elks on Saturday, June 19 at 10am.

The annual Wheeler memorial event will be held at Morningside Cemetery, Raymond St., Malone, and will feature a gun salute, wreath-laying and tribute by Felix Miller. Follow the signs to the Wheeler gravesite. Refreshments to follow at the House of History Museum, 51 Milwaukee St., Malone. Free and open to the public.

William Almon Wheeler was born in Malone, NY, a son of Almon Wheeler, a pioneer of Northern New York. Having worked his way through Franklin Academy, Wheeler entered the University of Vermont, where he spent two years. He returned to Malone where he studied law, and was admitted to the bar as an attorney. Wheeler became town clerk at the age of 21, Superintendent of Schools and, in 1846, Franklin County District Attorney.

In 1849 he was elected as a Whig to the NYS Assembly, where he served successfully two terms. Refusing a third term, he entered business in Malone. In 1857 Wheeler was elected to the NYS Senate as a Republican. In 1860 he was elected to the U.S. Congress, where he gave unswerving support to President Lincoln. In 1867 Wheeler was a delegate to the NYS Constitutional Convention, of which he was President. When Rutherford B. Hayes was nominated for the Presidency in 1876, Wheeler was chosen unanimously as his running mate. Wheeler served as Vice President of the United States from 1877-1881.