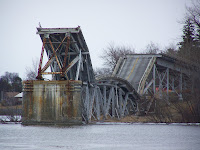 Citing safety concerns caused by the reconstruction of the adjacent Champlain Bridge, Vermont state officials have announced the immediate closure of the Chimney Point State Historic Site in Addison.

Commissioner of Economic, Housing and Community Development Tayt Brooks said the combination of construction activity and limited road access to the area led to the decision to close the site for the season.

“The Chimney Point site and the construction area share a single road, and are literally right next to each other,” Brooks said. “We had hoped to keep the site open, but in practical terms we can’t place the public at risk by having them in such close proximity to a working construction area.”

The Champlain Bridge, which was built to span Lake Champlain and connect Vermont and New York in 1929, was closed due to safety concerns in October 2009 and was demolished using explosives on December 28, 2009.

A new “modified network tied arch” bridge is being built in nearly the exact location, and a temporary ferry is carrying passengers across Lake Champlain while the bridge is being rebuilt.

Brooks said the Division for Historic Preservation – part of his department – and officials from the Agency of Transportation had worked together to try to keep the site operating despite the noise, dust, odor, and delays that were inevitable as a result of the construction.

But as the staging area for materials and equipment was selected – and expanded – adjacent to the site, the risk of an accident involving visitors had become too great.

“We tried, but VTrans officials recommended – and I agreed – that the site should be closed for this season, and possibly next,” Brooks said. “We will re-evaluate before next spring after we see where the construction stands.”

Before last week, the site had seen only 73 visitors in the 8 days it had been open, he said, adding that the Agency of Transportation will reimburse the Division for Historic Preservation for the lost revenue while the site is closed.

The state will examine whether some special events scheduled at the site – such as the Northeastern Atlatl Championship, part of the Festival of Nations in September – can be re-located, Brooks said.