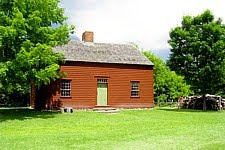 The Ethan Allen Homestead Historic Site and Museum has created “Ethan & the Boys @ Fort Crown Point” which uses smartphones to tell the tale of the Green Mountain Boys and their capture of the New York Forts Ticonderoga and Crown Point. The cannon “liberated” at those forts were delivered to George Washington in Boston to end the British siege.

The videos, in both English (with closed captioning) and Quebecois French, at http://www.ethanallenhomestead.org/ can be downloaded for viewing on an iPhone or iPod. One can see and hear our history as they tour throughout the region, using Google Maps to navigate to the historic sites. By integrating storytelling and navigation, both visitors and locals can enjoy a richer experience as they are guided to discover their own “sense of place”.

The project was funded by a Champlain Valley National Heritage Partnership Grant from the Lake Champlain Basin Program and is a partnership of The Ethan Allen Homestead Museum in Burlington and the Crown Point Historic Site in New York, with help from friends at the McCord Museum in Montreal, Canada.

Quebecois translation and narration were performed by staff and students at St. Francis Xavier School in Winooski, Vermont.