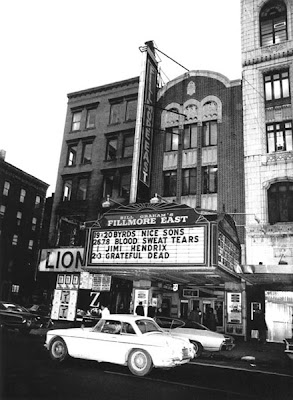 Tracing the career and achievements of a band that became one of the most significant cultural forces in 20th century America, the New-York Historical Society presents The Grateful Dead: Now Playing at the New-York Historical Society. The exhibition, on view until July 4, 2010, represents the first large-scale exhibition of materials from the Grateful Dead Archive, housed at the University of California Santa Cruz.

Through a wealth of original materials, the exhibition will explore the musical creativity and influence of the Grateful Dead from 1965 to 1995, the sociological phenomenon of the Deadheads (the band’s network of devoted fans) and the enduring impact of the Dead’s pioneering approach to the music business. Among the objects in the exhibition will be documents, instruments, audio and video recordings, album art, photographs, platinum records, posters, programs, newsletters, tickets, and t-shirts and other merchandise. Highlights will include the band’s first record contract, tour itineraries, backstage guest lists, decorated fan mail, rare LP test pressings, drawings for the fabled Wall of Sound amplifier array, scripts for the Grateful Dead ticket hotline, notebooks of Dead archivist Dick Latvala, life-size skeleton props used in the band’s “Touch of Grey” video and large-scale marionettes and other stage props.

“Despite the Grateful Dead’s close association with California, the band and New York have been an important part of each other’s history from the first time the Dead played here in 1967 to the band’s year-on-year performances in New York from the late 1970s through 1995,” commented Dr. Louise Mirrer, President and CEO of the New-York Historical Society. “This exhibition not only celebrates the band’s relationship with New York but its tremendous impact on American culture.”

&#8220The Grateful Dead Archive is one of the most significant popular cultural collections of the 20th century,&#8221 said Christine Bunting, the head of Special Collections and Archives at the University Library at UC Santa Cruz. &#8220We are delighted that the Historical Society is presenting this unprecedented exhibition, providing the public and the thousands of fans with such an exciting overview of the band’s musical journey.”

The Grateful Dead: Now Playing at the New-York Historical Society provides unique glimpses into the political and social upheavals and artistic awakenings of the 1960s and 1970s, a tumultuous and transformative period that shaped our current cultural and political landscape, and examines how the Grateful Dead’s origin in northern California in the mid-1960s was informed by the ideology and spirit of both the Beat Generation and the burgeoning Hippie scene, including the now-legendary Acid Tests. The exhibition also explores how the band’s refusal to follow the established rules of the record industry revealed an unexpected business savvy that led to innovations in a rapidly changing music industry, and also to a host of consumer-driven marketing enrichments that kept fans in frequent contact with the band.

Co-curated by Debra Schmidt Bach, Assistant Curator of Decorative Arts, and Nina Nazionale, Director of Library Operations at the New-York Historical Society, the exhibition will be organized thematically, beginning with an examination of the Grateful Dead’s early days in the Bay Area and its first performance in New York City. Other major exhibition themes include the band’s musical artistry, the business of the Grateful Dead, and the band’s special relationship with its fans.

Materials in the exhibition will be drawn almost exclusively from the extraordinary holdings of the Grateful Dead Archive, established in 2008, along with a small number of objects on loan from Grateful Dead Productions and private collectors. A series of public programs will complement the exhibition.

About the Grateful Dead Archive

The Grateful Dead Archive, housed at the University of California at Santa Cruz, University Library, represents one of the most significant popular cultural collections of the 20th Century. It documents the Dead’s incredible creative activity and influence in contemporary music history from 1965 to 1995, including the phenomena of the Deadheads, the band’s extensive network of devoted fans, and the band’s highly unusual and successful musical business ventures.

The Archive contains original documents, clippings, media, article and other publications about the Dead and its individual members, its tours and performances, productions, and business. Among the resources that will be invaluable for researchers are show files, programs, newsletters, posters, cover art, photographs, tickets and stickers. These artifacts document three decades of the band’s recordings and its performance of thousands of concerts. A collection of stage props, tour exhibit material, and, of course, tee-shirts gives dimension and visual impact to the collection. An unusual feature of the Archive will be the correspondence and art contributed over the years by supportive Deadheads and held as very important by the Dead.

The Archive, when processed, will be widely and freely accessible to fans and scholars It will be housed on the UCSC campus, and material from it will be prominently displayed and available for listening, viewing, and research in a dedicated Grateful Dead room located in UCSC’s new and renovated McHenry Library.

It is expected to take two years to process the Archive- parts of the collections will be debuted in stages as processing progresses. Material in the Archive will be physically preserved, its content described in detail in an electronically available finding aid, and digital copies, when appropriate, will be offered for viewing and listening from a UCSC Grateful Dead web site.