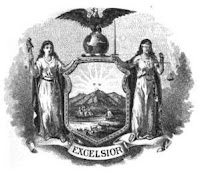 Maybe someone is sending us a message. Just when New York State Governor David Paterson is criticizing his fellow lawmakers over their ethics, the New York State Archives has announced that the archived websites of the defunct organizations designed to investigate political corruption are online. Part of an online collection called Archived State Government Websites, archival copies of the websites of former Governors George Pataki and Eliot Spitzer, along with other former elected officials and those of the defunct bodies such as the Commission of Investigation and the Commission on Lobbying are all available on the New York State Archives’ website.

The collection also includes the State Northeastern Queens Nature and Historical Preserve Commission (SNEQ) which was created in 1973 to regulate publicly owned lands and wetlands in northeastern Queens County (eliminated in the 2009-10 Executive Budget).

The Temporary State Commission of Investigation was created in 1958 and had a broad mandate to investigate &#8220corruption, fraud, organized crime, racketeering, money laundering, the conduct of public officers, public employees, officers and employees of public corporations and authorities, and mismanagement in New York State and local government.&#8221

Temporary State Commission on Lobbying was created in 1977 and &#8220monitored individuals and organizations seeking to influence State legislation, rules, regulations, and rate-making actions or local laws, ordinances, and regulations.&#8221 It’s mandate (and staff) was transferred to the new State Commission on Public Integrity in 2007.

There is a FAQ about what material on the sites are actually archived, and each record group has a separate FAQ on background and site-specific access problems.