Saratoga National Historical Park is preparing for the 2011 season and is looking for enthusiastic and dedicated individuals to assist as Volunteers in Parks (VIPs) in several areas. As a volunteer at Saratoga Battlefield you will receive training and a uniform, plus you’ll get to work in a beautiful environment with knowledgeable and friendly rangers.

Time requirements vary by position (they are listed below) and are arranged to work with the volunteer’s schedule. For more information, please call the Saratoga National Historical Park volunteer coordinator at 518-664-9821 ext. 225. 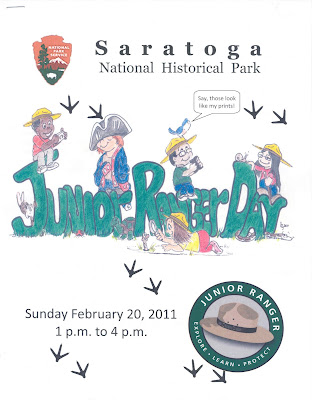 Saratoga National Historical Park, located on Routes 32 and 4 in Stillwater, invites kids between 5 and 12 years old to a special Junior Ranger Day on Sunday, February 20 from 1pm to 4pm. Kids get to enjoy fun indoor activities, earn a badge and win a gift! The program is free, but reservations are required by calling Ranger Megan Stevens at (518) 664-9821 ext. 219 or emailing her at [email protected] by February 12.

1:00pm “Now and Then” for ages 5 through 8
You get to carry a book bag for your schoolwork… and a soldier needed a haversack to carry things to stay alive! See what different things a soldier would need and then watch, “The Hessians are Coming” – an episode from the award winning PBS series “Liberty’s Kids” to find out about Saratoga’s key role in winning American independence.

2:00pm “A Soldiers Life” for ages 8 through 12
You can tell a lot from a uniform! Why wear bright red? Would you want to wear a hat that makes you look 7 feet tall? Try one on, then watch, “Benedict Arnold” – an episode of the PBS series “Liberty’s Kids” that explores the life of Benedict Arnold, a hero at Saratoga who turned into one of the world’s most notorious traitors.

3:00pm “Who’s Protecting Our Parks?” for ages 5 and up
Kids will have the opportunity to volunteer to dress up and pose for pictures as they learn about the roles individuals have in protecting America’s National Parks. Then see “The Hessians are Coming” an episode from the PBS Series “Liberty’s Kids” that tells how important the battles of Saratoga were to our country’s founding.

A number of interesting events are planned for the Old Saratoga region (Schuylerville, Saratoga, Victory and nearby) for the month of February.

Events kick off with a photo Scanning Session on Tuesday, February 8 starting at 9:30 am in the Saratoga Town Hall in Schuylerville. Get your old photos of the Schuylerville area scanned, archived with the town, and receive a photo CD.

Black History Month will be celebrated on Sunday, February 13 at 1:30 in the Saratoga National Historic Park Battlefield Visitors Center in Stillwater. Did you know that between 400 and 500 black soldiers fought at the Battles of Saratoga? Park Ranger Eric Schnitzer unveils new information about these freed and enslaved soldiers, while dispelling common myths about their service.

The local genealogy group meets on Tuesday, February 15 at 10 am in the Schuylerville Public Library.

The Heritage Hunters of Saratoga County has their meeting on Saratoga County Genealogy: Adventures in Serendipity Genealogy on Saturday, February 19 starts at 1 pm. at the Saratoga Town Hall. The program features Al Clarke explaining how his research in the Doc Lincoln House in Wilton lead to authoring two books and travels to Hawaii.

It is Junior Ranger Day on Sunday, February 20 at 1pm , 2pm, and 3pm at the Saratoga NHP Battlefield. For kids age 5-12! Enjoy one, two, or all three Junior Ranger programs, get your free badge, talk with a National Park Ranger, and see episodes of Liberty’s Kids on the big screen! Reservations required, either by e-mailing
[email protected] or calling 518-664-9821 ext. 219.

Videotaping Your Reflections of Old Saratoga on Tuesday, February 2 at 9:30 am in the Victory Village Hall on Pine Street. The Village Historian will videotape your memories and stories of local people, places and events for posterity.

Archive Scanning Working Session is planned for Thursday, February 24 at 4:30 pm at Saratoga Town Hall. Volunteers are needed to help the Historian’s Office to continue scanning documents and photos in the historical archive.

Researching Old Saratoga is the topic of the Old Saratoga Historical Association meeting on Thursday, February 24 at 7:30 pm at the Saratoga Town Hall. Saratoga National Historical Park will share an on-going historical research on Old Saratoga.

For more information about these events contact [email protected] or on the web.