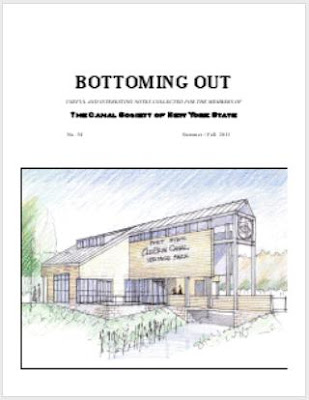 Bottoming Out is the journal of the Canal Society of New York State. It is published and sent to members of the Society twice a year. It features articles on the history of canals, trip previews and reviews, events calendar, and other “Useful and Interesting Notes”. See the Canal Society web page at www.newyorkcanals.org for more information. The Summer / Fall 2011 issue of Bottoming Out featured articles on: END_OF_DOCUMENT_TOKEN_TO_BE_REPLACED 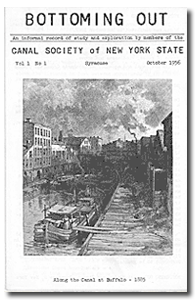 The Canal Society of New York State’s (CSNY) daylong 2011 Winter Symposium, will be held March 5th, 2011 at the Monroe Community College campus in Rochester, New York. The Symposium covers topics that are directly or indirectly related to historic or operating New York State Canals, canals and inland waterways worldwide, and the communities through which they run.

This year’s symposium will include a presentation, &#8220Clinton’s Ditch and Enlarged Erie Aqueduct Survey&#8221 by Capt. Rob Mangold, Vice President, CSNY- &#8220An Exploration of the Burlington and Desjardins Canals by Robert W. Sears, of the Canadian Canal Society- &#8220Managing NYS Canal Infrastructure in Difficult Economic Times&#8221 by Carmella R. Mantello, Director of the NYS Canal Corporation- &#8220Geographic Resources for the Erie Canal&#8221- &#8220Three Generations on the Erie Barge Canal: A Photographic Chronicle&#8221 by &#8220High Canals and Deep Rivers—Southern Germany Waterways Tour&#8221 and more.

CSNYS membership is not a requirement to attend. Pre-registration cost prior to February 23rd is $40 per person.

The $40 per person cost covers a continental breakfast, coffee break, lunch, parking and speaker fees. Provide Davd Kipp with the names of the attendees and a telephone number. A check for $40 should be made payable to: Canal Society of New York State

Registration can be made on the day of the seminar at $50 per person.

A downloadable program can be found at the society’s website.