There’s more, including a senator from Minnesota and a US Ambassador to Great Britain. By any standard, that’s an impressive list. What makes it truly mindboggling is one other fact: those are all the accomplishments of a single North Country native. END_OF_DOCUMENT_TOKEN_TO_BE_REPLACED

At times, the concept has been described as 20 to 30 years old, but it actually goes back much further. I’m old enough to recall the intense discussions during the 1970s, which takes us back 40 years. But even that is still well short of the idea’s birth. END_OF_DOCUMENT_TOKEN_TO_BE_REPLACED 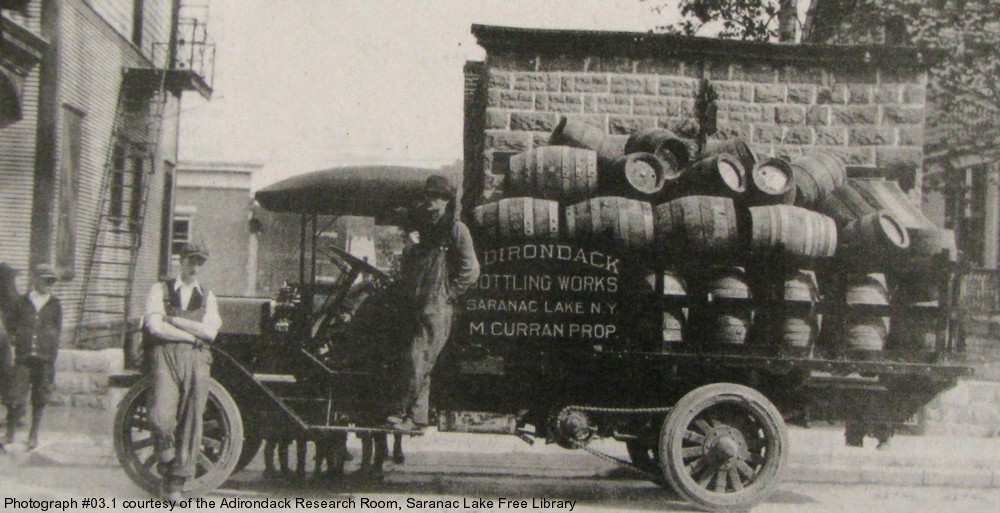 A new era of alcoholic beverage production is dawning in the Adirondacks. You can drink locally-brewed beer from any one of several micro-breweries, or imbibe vodka distilled from potatoes grown in Gabriels and filtered through the high-quality quartz crystals known as Herkimer diamonds. “Drinking local” has a long tradition within the Blue Line. Today, let’s consider the honorable history of Adirondack beer. END_OF_DOCUMENT_TOKEN_TO_BE_REPLACED

Functional, power-driven machinery was the desired result of his work, but while some tried to harness steam, Briggs turned right to the source for providing horsepower: the horse. END_OF_DOCUMENT_TOKEN_TO_BE_REPLACED

After impersonating Walter W. Baker, heir to the Baker chocolate fortune, and bilking his Richmond fiancee’s mother out of $15,000 in 1928 (equal to $197,000 in 2013), Ticonderoga’s Bernard Frederick Champagne was sentenced to ten years in a Virginia prison. He was paroled after serving more than six years, but the gates had hardly closed behind him when Champagne was at it again.

Shortly after his release, the US Department of Justice was tracking him across the North Country. As he had done for years in the past, Bernard managed to move quickly and stay a step ahead of his pursuers. END_OF_DOCUMENT_TOKEN_TO_BE_REPLACED

&#8220Dreaming of Timbuctoo,&#8221 the display put together by John Brown Lives! back in 2001, reveals the story of families that came to the Lake Placid area in the years before the Civil War, to establish farms and gain voting rights. END_OF_DOCUMENT_TOKEN_TO_BE_REPLACED

No bones were broken. It’s a statement of relief that frequently appears in accident reports, emphasizing the fact that perhaps bones should have been broken, but due to amazing luck or some other reason, the victim survived perilous circumstances to emerge relatively unscathed. Stories of that type appear occasionally, and they’re always interesting.

It’s remarkable that in July 1895, three North Country survival stories appeared on a single newspaper page. Forget broken bones—it’s amazing that any of the victims lived to see another day. Yet among the three, there was only one broken bone. END_OF_DOCUMENT_TOKEN_TO_BE_REPLACED

Heroes are defined in many ways—strong, brave, quick to act, selfless—and for the most part, we expect those traits to be found among the ranks of mature, responsible adults. But in 1927, in a span of less than thirty days, the North Country played host to two acts of heroism by local youths. Added together, the age of this remarkable pair of courageous children comes to just 19. END_OF_DOCUMENT_TOKEN_TO_BE_REPLACED

Despite the physical evidence against Saranac’s Allen Mooney in the murders of Ellen Thomas and Viola Middleton, he could still hope for a lesser conviction, even manslaughter, due to extenuating circumstances. Epilepsy, a weakness for drink, extreme jealousy—the man was obviously beset by many problems. Not a saint by any stretch, but was he a wanton killer? END_OF_DOCUMENT_TOKEN_TO_BE_REPLACED