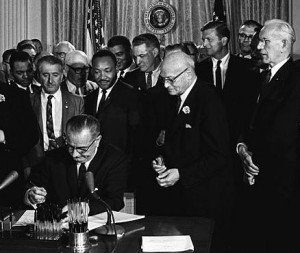 In recognition of the 50th Anniversary of the 1964 Civil Rights Act, Women’s Rights National Historical Park will sponsor a year-long series of programs titled “Keep the Dream Alive” Events. The kick-off program will correspond with the introduction of the most prominent civil rights legislation since Reconstruction.

On June 20, 1963 the Civil Rights Act was introduced on the floor of the U.S. House of Representatives. Throughout the next twelve months, the bill caused animated and heated discussions as it made its way through committees, votes, and amendments in both the House and U. S. Senate. The park will sponsor several more special events and a film festival throughout the next twelve months with a celebration on the 50th anniversary of the day President Lyndon B. Johnson signed the Civil Rights Act on July 2, 1964.

The park’s latest newsletter is available online in the pdf format.