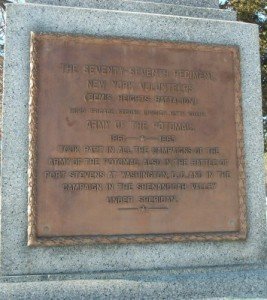 Though I can’t answer the question, I do recall that in my former employment, it was notable when three men all having the same first name worked in the same department. So what can you say about “The One-Legged Jims,” a group of three Civil War veterans?

Among the many Union outfits filled by soldiers from upstate New York was Company A, 77th Regiment, NYS Volunteers. Enlistment sites, always plentiful, included Chatham, about twenty-five miles south of Albany, and Westport, on the shore of Lake Champlain.

All three served in Company A, 77th Regiment. Even though there’s more than a two-year span between their muster dates, they all ended up serving at the same time in 1864. Three Jims, same regiment, same company?no big deal.

In June of that year, the men of the 77th were joined in battle at Petersburg, Virginia. During a lull, the troops relaxed behind breastworks (barriers to protect from ground attack). Many of them laid down to rest, talking and joking among themselves to ease the tensions of war. Within their midst, by mere coincidence lying side by side (by side), were the three aforementioned Jims.

Hell erupted in an instant, courtesy of a Rebel shell that landed virtually in their laps. In describing the scene firsthand, Dr. George Stevens said, “Its explosion threw them in every direction. One went high in the air and fell twenty feet from the spot where he was lying when the shell exploded. Strange to tell, not a man was killed, yet three had each a leg crushed to jelly, and two others were seriously wounded.”

But for the quick work and dedication of medical personnel, the three Jims with mangled legs might have died on the spot. The surgeon gave each a glass of brandy, administered chloroform, and went to work.

Within thirty minutes, three limbs were amputated, the remaining stumps were treated and bandaged, and the men were in ambulances. Their destination was City Point, eleven miles away, where they arrived within three hours of being wounded. The speedy effort saved their lives. Later, all three were transferred to Stanton General Hospital in Washington.

One shell, three legs lost … three left legs … and three one-legged survivors, all named Jim. What are the chances? The coincidence wasn’t lost on anyone, and it earned the men plenty of extra attention during their recovery. In the years to come, they became known informally as The One-Legged Jims. Their story developed into a sort of military urban legend: men would tell it as an incredible army tale from their own outfit, perhaps not aware that it was, in fact, a true story taken from New York’s 77th. 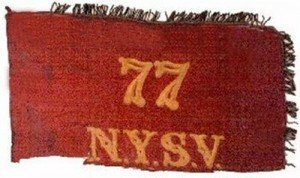 After the war, Jim Lawrence eventually moved west, but Barnes remained in his hometown of Westport. At veterans’ GAR (Grand Army of the Republic) reunions across the state, he became known as the best of storytellers. The highlight, of course, was the retelling of how The One-Legged Jims, a very exclusive club, came into being. Many of the listeners had been present when the shell exploded.

“Well, boys, it was down in a rifle pit before Petersburg on the 21st of June, 1864?lots of you remember the day?myself, Jim Lawrence, and Jim Allen, all of Company A … had finished our coffee and were lying down, smoking our pipes. My head was supported by my arm, which rested on my knapsack, and my right leg was curled up under me, my left one being stretched out. The other two Jims were lying near me in about the same position. That Rebel shell came, it did, and three Jims lost their left legs.”

He was always careful to describe the treatment and efficiency of the surgeon and others who worked so hard to keep them alive every step of the way.

Barnes made his mark outside the military as well. A pension (equal to $800 a month today) for the loss of his leg helped financially, but he also worked. Those who follow the history of Lake Champlain might recognize James Barnes as the first keeper of Barber’s Point Lighthouse when it opened in 1873.

For the remainder of his life, Barnes attended GAR gatherings. The best one of all, from his perspective, came in 1884, when the annual reunion of the 77th Regiment was held at Westport. Jim’s stories were a highlight of the affair. Over the years, from Saratoga to Plattsburgh, he entertained folks in like manner at veterans’ events and made many friends.

The 1890 reunion was remembered by many as both sweet and bittersweet. Jim Lawrence, the only other surviving member of The One-Legged Jims, came all the way from Nebraska, reconnecting with his friend and sharing stories from the past. It was fortunate that he did.

After the Gloversville reunion, Barnes headed for Westport, but stopped to visit a friend at Fort Ann in Washington County. While there, he was felled by a stroke and never made it home alive.

As fate would have it, the reunion for 1891 was held in Westport. The unfortunate absence of Barnes was noted in a published summary of the event:

“The ‘boys in blue’ … adjourned to the lower rooms, where refreshments were served and old army stories (which no doubt grow tougher as they grow older) were told. James Barnes, the champion storyteller, was missed from the ranks, he having been summoned by the last roll since their last reunion.”

Photos:  A monument to the men of the 77th- the crimson silk flank marker of New York’s 77th Regiment.