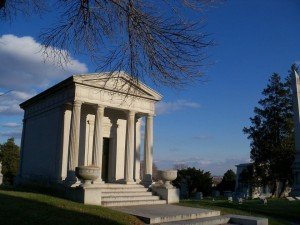 Beginning May 15 and running through October 13, Green-Wood marks its 175th anniversary with an exhibition at the Museum of the City of New York. Entitled A Beautiful Way to Go: New York’s Green-Wood Cemetery, the show features more than 200 objects – including 19th-century mourning clothes- vintage stereopticons- historic maps, advertisements and memorabilia such as a domestic clock with Green-Wood imagery- and mid-1800s prints and photographs. There’s also a gallery-sized floor map of the cemetery which lays out the locations of its many handsome and artistically noteworthy statues, mausoleums and landscaped elements.

Founded in 1838, Green-Wood was New York State’s second-most-popular tourist destination after Niagara Falls throughout the 1800s. Predating both Central Park and Prospect Park, this 478-acre landscape was a bucolic refuge from the city. Full of hills, valleys, glacial ponds and paths, it was a prime destination for family outings, carriage rides and picnicking. It was also a magnet for art lovers containing as it did (and still does) one of the largest outdoor collections of 19th- and 20th-century statuary and mausoleums.

The story of Green-Wood Cemetery is multi-faceted, comprising equal parts architectural, art, social, and cultural histories. It has become an increasingly important center of historic, architectural and cultural preservation. Its grounds are a museum of monuments and statuary by leading architects and artists in a wide range of styles. Its bucolic landscape, which reflected changing notions of death and nature, influenced other so-called rural cemeteries and public parks.

Highlights of A Beautiful Way to Go: New York’s Green-Wood Cemetery will include:

• 19th-century landscape paintings by Asher Brown Durand and John William Casilear, important Hudson Valley School artists who are buried at Green-Wood Cemetery, as well as other works of art lent by leading museums.

• Eight large photographs of Green-Wood, each measuring 20” x 48” and depicting different seasons, taken by leading contemporary photographer Jeff Chien-Hsing, which were commissioned by the Museum specifically for the exhibition.

• Historic maps, guidebooks, and other memorabilia, such as a domestic clock with Green-Wood imagery.

• A zinc sculpture of a Civil War soldier at Green-Wood Cemetery, one of four that were copied in cemeteries across the country.

The founding of Green-Wood Cemetery was sparked by New York City’s enormous growth at the beginning of the 19th century. The opening of the Erie Canal in 1825 linked New York and its port to America’s western regions, making the city an economic powerhouse and a magnet for waves of immigrants seeking employment. As the population zoomed, existing burial grounds in Manhattan soon filled up, and new ones were required.

Green-Wood Cemetery, incorporated on April 18, 1838 in the newly incorporated city of Brooklyn, responded to this need. From its beginnings, Green-Wood addressed far broader themes and aspirations than its predecessors, and represented a new type of burial place: non-sectarian and not even adjacent to a church. Green-Wood’s bucolic landscape, a prime example of the rural cemetery movement of the 1830s would influence not only the nation’s other rural cemeteries, but also its public parks and outlying suburbs.

At the same time, Green-Wood is an important site in art, architecture, and design and is socially significant as well- burial at Green-Wood quickly attained considerable cachet, attracting the most accomplished New Yorkers to select Green-Wood as their final resting place. As an acknowledgment of these considerable distinctions, Green-Wood in 2006 became only the fourth cemetery in the United States to be designated a National Historic Landmark.

Green-Wood today will be presented via eight large photographs that depict the cemetery in every season. These photographs were commissioned by the Museum specifically for the exhibition, and
taken by leading contemporary photographer Jeff Chien-Hsing.

Green-Wood’s founding also will be presented via drawings, maps, and historical documents that look at the cemetery within the context of the rural cemetery movement. As this section shows, the booming industrial cities of Europe and America around 1800 were often overcrowded, unsanitary, and ridden with lethal diseases. These conditions propelled city dwellers to seek respite. The phenomenon of the rural cemetery, with its verdant lawns, trees, and water features, all within easy travel distance from the city, was inaugurated in 1804 with Paris’s Pere-Lachaise.

The rural cemetery movement soon spread to England and, by the 1830s, to the United States. The first such cemetery in this country, Mount Auburn in Cambridge, just across the Charles River from Boston, was established in 1831, followed by Laurel Hill Cemetery on the periphery of Philadelphia, and, in 1838, Green-Wood Cemetery in southwestern Brooklyn. Its landscape was designed by David Bates Douglass.

Following the precepts of the time, Douglass “improved” upon the natural features of Green-Wood’s original 178-acre site by adding gently curving paths and framing views of unexpected sights and vistas. Special attention will be paid to Henry Evelyn Pierrepont, who served on the commission established to plan Brooklyn’s physical layout and whose commitment to the rural cemetery movement led to Green-Wood’s creation. Through a specially created graphic display, exhibition visitors will be able to follow Pierrepont’s explorations in search of design prototypes for Green-Wood, from Mount Auburn Cemetery, which he visited in 1832, to Pere-Lachaise in France and Campos Santos in Italy.

In the exhibition’s main gallery, visitors will walk on a gallery-sized map of Green-Wood Cemetery, which will serve as a framework for the positioning of many of the exhibition’s artifacts. These materials will explore the landscape, art, and architecture of Green-Wood as well the stories of its most celebrated permanent residents.

Green-Wood’s Permanent Residents From its beginnings, Green-Wood’s bucolic setting was a magnet for many leading New Yorkers, with the first generation of its prominent residents attracting future ones hoping to secure their final resting place in exalted company.

Elucidating the myriad contributions that Green-Wood’s residents have made to both New York City and the world, the exhibition will feature artifacts that serve as mementos of the active lives of Green-Wood’s residents. Artifacts on view will be drawn from the cemetery’s own collections, as well as from those of the Museum of the City of New York and other leading museums and institutions.

The exhibition will include a selection of vintage photographs of important people buried at Green-Wood taken by Napoleon Sarony, one of the most popular and prolific portrait photographers of the 19th century. (Sarony is buried at Green-Wood.) There also will be paintings by artists buried at the cemetery- prints by illustrator Nathaniel Currier- a headdress and lamp by Louis Comfort Tiffany- a sewing machine made by Elias Howe, inventor of the first American-patented example- musical scores by composers Leonard Bernstein and Fred Ebb- a Kodak camera designed by Walter Dorwin Teague- the first modern safety pin invented by Walter Hunt- and, tobacco canisters and signs for Lorillard, founded by Pierre Lorillard.

Major works of art and architecture complement the beauty of Green-Wood’s natural landscape. Starting at its imposing entrance gates, designed in the Gothic Revival style by Richard Upjohn and Son, Green-Wood’s buildings and structures offer a panorama of myriad aesthetic movements and changing tastes from revivals of Egyptian to Romanesque and Renaissance traditions. As many of New York’s leading architects worked in Green-Wood Cemetery, it also provides a resume of their careers on a small scale.

Green-Wood’s architectural masterworks include its chapel, designed by Warren &amp- Wetmore, best known for Grand Central Terminal, in a style inspired by Christopher Wren’s Thomas Tower at Oxford, as well as structures by John Russell Pope and McKim, Mead &amp- White. With its stately rows of stone obelisks and picturesquely placed tombs, Green-Wood also houses a remarkable collection of sculptural monuments by such figures as Daniel Chester French and Augustus Saint-Gaudens. As such, Green-Wood advanced efforts by late 19th-century American artists to elevate the nation’s artistic heritage. In 1893, for example, French, Saint-Gaudens, and others formed the National Sculpture Society to educate the public about good sculpture.

The exhibition will feature original drawings and other historic artifacts underscoring Green-Wood’s architecture and art heritage. Specific examples include a full-scale zinc sculpture of a Civil War soldier at Green-Wood. There will be beautiful contemporary black-and-white photographs of the cemetery’s buildings and monuments by photographer Colin Winterbottom. Other materials on display will include 19th-century mourning clothes and artifacts- a suite of exquisite prints by James Smillie, dated 1846- photographs by Joseph Hall, circa 1865- hundreds of vintage stereopticons- vintage guide books- brochures- advertisements- and even domestic lamps incorporating Green-Wood imagery, all of which demonstrate the popularity of the site’s romantic and picturesque beauty with the general public. Throughout the 19th-century, Green-Wood ranked as New York State’s second most popular site, after Niagara Falls, to be visited by tourists. Additionally, the exhibition’s primary gallery will feature a slide show exploring various cultural aspects of Green-Wood.

A Beautiful Way to Go: New York’s Green-Wood Cemetery is organized by Donald Albrecht, the Museum of the City of New York’s Curator of Architecture and Design. The exhibition has been designed by Abbott Miller of Pentagram. The exhibition is made possible by Mr. and Mrs. C. Payson Coleman Jr., Mr. and Mrs. Earl D. Weiner, Ann Walker Gaffney, Gibraltar Mausoleum Construction Company, Platt Byard Dovell White Architects, Regan Agency Inc., and Supreme Memorials, Inc. Additional support is provided by The Green-Wood Cemetery.

Historian John Tauranac leads a tour of three little-known but historically significant Greenwich Village burial places. He shows how “to be buried&#8221 takes on an entirely new meaning given the fact that two of the cemeteries are literally buried and a third was considerably reduced in size when some of its residents were unearthed and re-interred half a mile north. NOTE: Meeting location will be given within two (2) days of registration.

Tickets: $20 ($15 for MCNY members, seniors and students). Reservations and prepayment required. To register by phone or for more information, please call 917-492-3395.

Donald Albrecht, the Museum of the City of New York’s curator of architecture and design and the organizer of A Beautiful Way to Go: New York’s Green-Wood Cemetery, leads a tour of this exhibition marking Green-Wood’s 175th anniversary. Participants will learn about the cemetery’s many famous (and infamous) residents, the architectural and design landmarks on the 478-acre grounds, and the artifacts and artwork that illustrate the cemetery’s rich history.

Free with Admission (Admission is $10 for adults- $6 for seniors and students- $20 for families with max 2 adults. Admission is FREE for MCNY members and children 12 years and under.) For more information, please call 917-492-3395.

Tuesday, May 21 at 6:30 pm
Talk: Pictures After Death: Postmortem Photography and Memorialization in 19th-Century America

Photographing the dead was a common practice in the 19th and early 20th centuries, a way for mourners to visually “embalm” their loved ones. Until recently, however, this once ubiquitous genre of American photographs was largely unexplored. Collector Stanley Burns, MD, a professor at NYU Langone Medical Center, speaks about how postmortem photography shaped 19th-century American culture. Dr. Burns has amassed the most comprehensive collection of these photos in the world and has written a series of books on the topic entitled Sleeping Beauty: Memorial Photography in America.

One thought on “NYCs Green-Wood Cemetery To Mark 175th Anniversary”