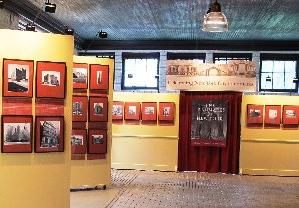 The show fills their newly configured gallery space at the 1907 Carriage House and includes a collection of 90 black and white photos documenting a select cross-section of New York City’s best loved architectural treasures.

Visitors will recognize the exterior silhouettes of iconic structures like the Little Red Lighthouse or Rockefeller Center but be equally intrigued by lesser known landmarks like the star studded interior of the Paradise Loews Theatre or the Alice Austen House on Staten Island, home to one of America’s earliest female photographers. The buildings highlighted span more than 300 years from 1640 to 1967.

The opening reception is free and open to the public. Dr. Barbaralee Diamonstein- Spielvogel, Vice Chair of the NY State Council on the Arts and curator of the touring exhibit will give a talk and sign copies of her book. Refreshments will follow.

The Landmarks of New York will be on display at the Jay Heritage Center from June 2 through Labor Day. The exhibit was made possible with the support of the NY State Office of Parks, Recreation and Historic Preservation, The Preservation League of New York State and the NY Historical Society with funding provided by JP Morgan Chase.