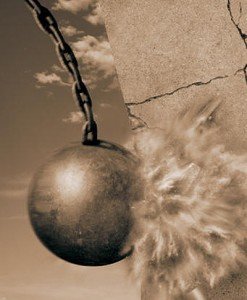 The time has come to destroy the historic sites of New York. These sites occupy valuable space, are of no value, and waste the energy of decent people in an useless effort to preserve the past. Why bother?

Why should anyone assist in this folly. There is no constructive purpose to the continued existence of historic sites.

Schools don’t have field trips to them.
Families don’t visit them.
Adults don’t join the friends groups.
Tourists don’t care about them.

The time is past due to wake up, smell the coffee, and rid ourselves of these obsolete relics from a time no one cares about.

Lest you think I am being callous, there is an alternative which is cheaper, cleaner, and more attuned to the realities of the present population. LET’S DIGITIZE HISTORIC SITES! Online is the way to go. Everybody prefers online to the physical otherwise newspapers would be thriving. The time has come for the historic community to go digital and end the dependence on the physical.

I came to this realization at the New York State Archives. On Saturday, April 6, a program which I had initiated was held at the New York State Archives and Library. The goal of the program was to familiarize participants with the resources available to them at the these institutions located in the same building in Albany. During one of the sessions, a representative of the Archives mentioned the discussion occurring within that organization over whether to print a certain publication or simply to make it available online as a digital file. Suddenly it hit me. Who needs the Grand Canyon when you can see a digital image of it on the web?! Why physically walk the fields of Gettysburg when you can do so with a mouse from your home or from anywhere on your cell phone? When Barak Obama was first elected president didn’t you save a URL and not a newspaper?

The digitization of the human experience through the permanent connection to electronic devices will revolutionize humanity and elevate us to a higher plane of existence. The elimination of the physical represents an advance of the species. There is no need to physically touch an object when the experience can be digitized. Isaac Asimov even wrote what he thought was a science fiction story in the 1950s about a people who were strictly taught from birth to despise personal contact. And he didn’t know about the iPhone.

Although touch is one of our five senses at present, it is one we can dispose of through the miracle of science creating a purely digitized world. One day even sex won’t require touch, not even by your self. Then and only then will the Matrix Generation have achieved its supreme level. Sheldon Cooper is merely the herald of the better tomorrow which awaits us all. When he finally succeeds in downloading his consciousness to an inanimate object it will be a cause for celebration as the most momentous event since the first big bang.

The rest of the world may be slow to catch up with us. For example, according to a recent article which I read online, the ancient site of Alacahoyuk in Central Anatolia will be turned into a tourism attraction center with the completion of new facilities. The site currently draws 50,000 visitors annually, a number comparable to the population of many counties in New York State and certainly more than visit many of the historic sites in New York State. All this for a site which traces the history of the Hittite civilization that has been dead for millennia until resurrected by archaeologists. That’s some path through history. Obviously Turkey is not as advanced as New York where we know there is nothing to be gained by visiting a real historic spot when the past is irrelevant and it can be digitized for those unfortunate few still trapped in it who have yet to embrace a future where touch has been eliminated and the physical is suspect.

Look around and no matter where you do you will see people connected to their devices. You will see people who go through withdrawal symptoms if they are disconnected from their devices. No matter what people are doing or where they there they need to be connected or they will die. If a tree falls in the woods and it is not on YouTube, has anything happened? If you are breathing but not connected are you alive? Why do we need historic sites?

In an article entitled “Your Phone Vs. Your Heart” (NYT March 24, 2013), Barbara Fredickson writes about a study about to be published that reports the biological capacity to connect with other people is negatively correlated with the amount of time one is electronically connected. The neural pathway [her term] which is being strengthened through extended use is the one for connection through a device and not to a person. The biological capacity to connect with people declines with reduced usage just like those old historic sites which become lifeless and abandoned decline as the human presence is reduced or eliminated. The more one becomes part of the human experience in the flesh through being part of something personal, the stronger the body becomes. Ask the Louisville men’s basketball team player about what it meant when a teammate raced over and touched him after the player broke his leg and the bone protruded six inches through his skin. Remember why Bruce Springsteen sang to glory days of high school baseball. Think about how Friday Night Lights defines and sustains so many communities in this country to this very day. It should be no surprise that the decline in civics and decline in historic site visitations parallel each other. We have become less connected to the physical communities of both our past and our present and more connected the digital ones which exist through our devices.

And the weirdest thing of all is people gathering together in one spot at a conference or convention on technology of all things. Why not just digitize the conference? Think of the money which could be saved and the time which could be better spent playing with ones devices rather than making the effort and spending the money to get together in person at a conference. The charge for the Comic Con in New York this October is $85. Last year 116,000 paying people attended. Why meet in person?

Maybe there is something else going on after all as Asimov reminded us. Maybe people who need people aren’t the luckiest people in the world but the normal people in the world. Maybe historic sites shouldn’t be digitized and destroyed. Maybe for a story-telling species of people who need to connect to other people, historic sites in each and every community can help strengthen those neural pathways and reknit the social fabric which has been unraveling. Is it possible I was wrong when I wrote that New York’s historic sites should be destroyed. Maybe Gilda Radner had it right.